Iraq's first Kurdish president, Jalal Talabani, passed away in Germany on Tuesday, aged 83. His body was flown on Friday to his home city of Sulaimaniya in northern Iraq for burial.

The body of Kurdish leader and ex-Iraqi president Jalal Talabani arrived on Friday in Sulaimaniya, his home city in northern Iraq, from Germany, where he died on Tuesday at age 83.

The Iraqi Airways plane transporting Talabani's coffin was exempted from a ban on international flights imposed a week ago by Baghdad on the semi-autonomous Kurdish region in response to a Kurdish Regional Government referendum last month on support for independence.

Talabani stepped down as Iraq's president in 2014, after a long period of treatment following a stroke in 2012.

Iraqi leaders and world dignitaries gathered at Iraq's Suleimaniyeh airport to pay their respects to Talabani.

His casket, draped in the flag of the semi-autonomous Kurdish region, was offloaded from the plane to waiting dignitaries at the airport.

Iraqi President Fuad Masum presided over the ceremony at the airport, with his widow in attendance.

Iranian Foreign Minister Javad Zarif, the highest-ranking foreign official in attendance, KRG President Masoud Barzani and representatives from the US, UN, EU and other states and organizations laid wreaths on Talabani's casket.

Thousands of mourners were at the airport from which Talabani's body will be taken in procession.

Talabani, a Kurdish leader who once battled Iraq's central government, accepted the largely symbolic post of Iraq's presidency in 2005. He was hailed in death as a unifying figure in national politics. 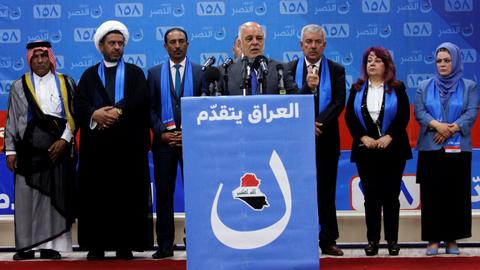 For Kurds in Kirkuk, Iraq election proves more divisive than ever