The push towards Khan Shaykhun threatens to encircle the last remaining pocket of opposition and rebel territory in neighbouring Hama province, including the towns of Morek, Kafr Zeita and Latamneh.

Syrian regime fighters pushed further into an opposition bastion in northwest Syria on Wednesday, inching towards a key town after months of deadly bombardment, a war monitor said.

Air strikes and rocket fire by the regime and its ally Russia have pounded Idlib for more than three months, killing hundreds and displacing tens of thousands.

In the south of the stronghold, almost all residents of Khan Shaykhun –– which lies on a key highway coveted by the regime –– have left the town.

The advance towards Khan Shaykhun threatens to encircle the last remaining pocket of rebel-held territory in neighbouring Hama province, including the towns of Morek, Kafr Zeita and Latamneh.

The road in question runs through Idlib, connecting regime-held Damascus with the northern city of Aleppo, which was retaken by loyalists from the opposition in December 2016.

After a week of ground advances, Assad's fighters were just a few kilometres away from the town on Wednesday, the Syrian Observatory for Human Rights said.

"Regime forces are now four kilometres (2.5 miles) from Khan Shaykhun to the west, with nothing between them and it but fields," Observatory chief Rami Abdel Rahman said.

To the east, pro-Assad fighters are battling to control a hill just six kilometres (less than four miles) from the town, the head of the Britain-based Observatory said.

Clashes on Wednesday have killed 14 regime forces, as well as 20 militants and seven rebels, he said.

AFP correspondents have reported seeing dozens of families flee fighting over the past few days, heading north in trucks piled high with belongings.

A buffer zone deal brokered by Russia and Turkey last year was supposed to protect the Idlib region's three million inhabitants from an all-out regime offensive, but it was never fully implemented.

An alliance led by militants from Syria's former Al Qaeda affiliate –– Hayat Tahrir al Sham –– took over administrative control of the anti-Assad stronghold in May.

The United Nations says dozens of health centres, as well as schools, have been targeted.

Humanitarian workers have warned that any fully-blown ground attack on Idlib would cause one of the worst humanitarian disasters of Syria's war.

The conflict has killed hundreds and thousands of people and displaced millions at home and abroad since starting with the repression of anti-regime protests in 2011.

The sarin gas attack on Khan Sheikhoun in 2017 killed dozens of people and prompted US President Donald Trump to order a missile strike against the Syrian air base from where the United States said the chemical attack had been launched.

An investigation conducted by the United Nations and the Organisation for the Prohibition of Chemical Weapons said the Syrian regime was responsible for releasing sarin on the town on April 4, 2017. 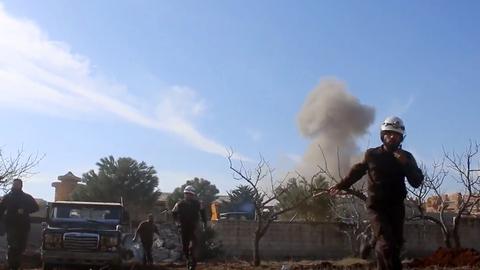