Security forces use tear gas, water cannon and live fire to disperse demonstrations over unemployment, corruption and poor public services in capital Baghdad and other provinces.

Two demonstrators were killed and more than 200 people wounded on Tuesday, health officials said, in clashes with security forces during protests in Baghdad and the provinces that mounted the first challenge to Iraq's fragile one-year-old government.

More than 1,000 protesters had descended on the capital before security forces dispersed the crowds with a volley of gunfire and tear gas.

Protests in Baghdad left one dead and 200 wounded, including 160 civilians, the health ministry said without providing further details.

According to medical and police sources, most of them needed treatment for tear gas inhalation and some were injured by rubber bullets.

A health official in Dhi Qar later said that one protester was killed and two others were wounded in the southern province.

'Those thieves robbed us'

With Iraqi flags draped over their shoulders or wrapped around their foreheads, the demonstrators had gathered in the iconic Tahrir Square, with a wide range of grievances but apparently without a unified leadership.

"Those thieves robbed us!" they cried out in condemnation of the political class in Iraq, considered the 12th most corrupt country in the world by Transparency International.

"The problem is that parliament is a bunch of gangs that have divided up everything amongst themselves," said Abbas Fadel, a 30-year-old demonstrator.

Some were on the streets to protest at the lack of public services, including rampant power cuts, water shortages, and unemployment, particularly among youth.

"Show us what you can do: show us paved roads, a city that functions, reconstruction, work, public services. We have none of that," said Mustafa Khaled, 34.

And others carried portraits of Staff Lieutenant General Abdulwahab al Saadi, who was this week removed from his post in Iraq's Counter-Terrorism Service in a shock move.

Demonstrators were cleared from Tahrir Square the first time but then regrouped, facing a steady volley of live shots, water cannons and tear gas from security forces.

More shots were fired even after the crowds had dispersed into adjacent neighbourhoods.

Three young men could be seen carrying a wounded demonstrator wearing a checkered white-and-black scarf to protect him from the tear gas.

Some protesters made their way towards Al-Jumhuriyah Bridge, which leads into the high-security Green Zone that houses government offices and foreign embassies.

Police had set up metal barricades and stationed trucks at the mouth of the bridge to prevent protesters from crossing, and a security source inside the zone told AFP that reinforcements were requested.

The gathering was the biggest demonstration against Prime Minister Adel Abdel Mahdi since he came to power in late October 2018, just months after demonstrations that engulfed the southern city of Basra last summer.

Despite simmering frustration with the premier over the past year, streets in Baghdad had remained relatively quiet before a confluence of factors apparently reignited public anger this week.

Graduates have slammed the government for failing to hire them in a country where a vast majority of the labour force is employed by a bloated public infrastructure.

According to the World Bank, youth unemployment in Iraq is running at around 25 percent, double the national average.

Abdel Mahdi has also taken flak over the decommissioning of Saadi, feted as a national hero for recapturing Iraqi territory from Daesh.

Other protests in Nasiriyah and Najaf, south of Baghdad, on Tuesday saw hundreds gather in anger at poor services before also being dispersed by tear gas, AFP reported.

Since 2004, a year after the US-led invasion that ousted dictator Saddam Hussein, almost $450 billion of public funds has vanished into the pockets of shady politicians and businessmen, according to official figures. 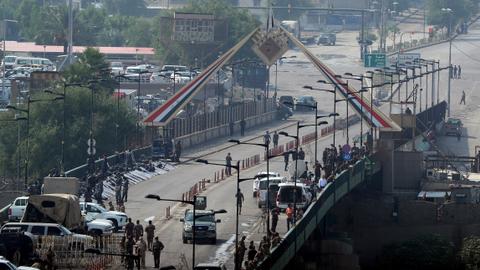