Biden administration says that it shares the idea with the army that Iran's Revolutionary Guard Corps "are terrorists" as Tehran pushes to delist the key armed group.

The United States has insisted on keeping the elite Quds Force of Iran's Revolutionary Guard Corps on its designated list of terror groups, as Washington pushes on with negotiations to restore the 2015 Iran nuclear agreement.

The chairman of the Joint Chiefs, General Mark Milley, had told a congressional hearing on Thursday that in his "personal opinion" the Quds Force should not be dropped from the terror list, which has been one of Tehran's conditions to renew the deal.

Asked on Friday whether that opinion reflected the position of the administration of President Joe Biden, State Department spokeswoman Jalina Porter seemed to agree.

"The president shares the chairman's view that IRGC Quds forces are terrorists," she told reporters.

The Guards as a whole, as well as the Quds Force in particular, were blacklisted under former president Donald Trump, who wanted to toughen sanctions against Iran after Washington pulled out of the agreement aimed at preventing Tehran from developing nuclear weapons.

READ MORE: Israel urges US not to remove IRGC from terror list

While the Biden administration has been trying for a year to resuscitate the deal, negotiations with Iran have snagged on this particular issue.

Tehran is demanding that the IRGC be removed from the blacklist. This push has sparked outrage from some US politicians, especially within the right-wing opposition.

The fact that Milley, and now the US government, seem to distinguish between the Guards in general and the Quds Force unit, which is blamed for "destabilising activities" in the Middle East and elsewhere, could hint at a US compromise proposal.

It would be theoretically possible to remove the IRGC from the blacklist while keeping the Quds Force on it.

US negotiator Rob Malley said at the end of March that the IRGC would remain under US sanctions even if the group was removed from the list, and that the stance of the United States would remain unchanged.

Porter appeared to back that up on Friday when she noted that "out of the 107 Biden administration [sanctions] designations in relation to Iran, 86 have specifically targeted the IRGC-related persons as well as affiliates."

While that appeared to hint that the US was moving toward delisting the IRGC, she did, however, reiterate that an Iranian nuclear deal was "neither imminent nor certain at this stage.” 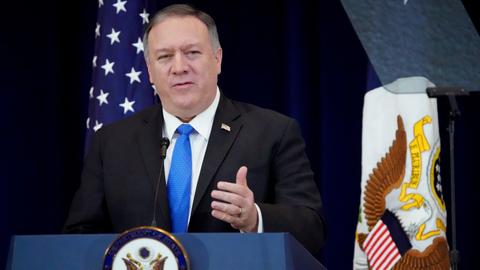