Syrians explain how pro-Assad conspiracy theories are hurting them

Propaganda distilled through western journalists mars the flow of information out of Syria, and helps the Assad regime escape accountability for its widely documented crimes.

In Idlib, Syrian civilians marched to honor the 7th anniversary of the peaceful pro-democracy protests against Syrian regime leader Bashar al Assad. Seven years ago next month, however, will mark the anniversary of the Assad regime choosing to kill protesters in lieu of hearing out their modest demands for political and economic reforms.

As Syrians continue to bravely and defiantly take to the streets to protest the uncompromising savagery of the Assad regime, their homes, hospitals, and markets are attacked from sun up to sun down by Russian warplanes.

“The warplanes and shelling begins each day at 9am and don’t stop until 9pm,” Alaa al Ahmad, a Syrian journalist in besieged Eastern Ghouta told me.

Bahia Mardini, a Syrian journalist and human rights activist, observes, “The butchery, suffering and sectarianism we see today is especially devastating, considering the conflict was rooted in a peaceful call for democracy.”

Today, more than 500,000 Syrians are dead, alongside more than 10 million who have been displaced from their homes, villages, cities, and the country, while the mass killing continues unabated.

Hundreds of civilians have been killed by Assad-Russia airstrikes in the past few weeks alone – with 200 killed in just two days in eastern Ghoura – alongside another 300,000 civilians who have been displaced since December when the regime’s intensified attacks on Idlib began, while doctors and aid workers in rebel held territory provide further evidence that Assad continues to use chemical weapons.

“The footage of children suffocating, and people screaming as they choke from fumes is hard to escape,” observes Mardini.

“The regime does not care how young their victims are, or whether they are too frail to hide. Instead, it deliberately targets civilians in order to strike fear in those it seeks to control.”

But in the background of this unrelenting human suffering are the increasingly high-pitched squeals emanating from the keyboards and social media accounts of Western supporters and defenders of Assad.

An amalgam of far-left and far-right bloggers, cranks, conspiracy theorists and loons have converged since the beginning of the conflict to disseminate pro-Russia generated propaganda that serves only to conceal both Russia and Assad’s war crimes, and smear victims of their genocide.

No doubt you’ve heard each one of these entirely and widely debunked pro-Assad conspiracy theories by now: that the peaceful protests against Assad were the product of a foreign driven “regime change” operation; that the White Helmets, a volunteer rescue group that has been credited with saving more than 100,000 lives in rebel held territory, is somehow either a “regime change” propaganda tool or a public relations front for al Qaeda or both; that Assad didn’t use chemical weapons but the rebels used them on their own families to gain international sympathy; that Assad is fighting “terrorists,”; that the entirety or majority of Assad’s opponents are foreign-born jihadists; that the rebels poisoned Damascus’ water supply; and so on and so on.

“The sad thing is that so many Syrian activists and journalists spend a lot of time refuting these s**t conspiracies because they can have such a damaging impact on real people and their lives,” tweeted Leila al Shami, a Syrian human rights activist and author, in response to a claim that the White Helmets belong to Al Qaeda.

These pro-Assad conspiracies have gotten so out of hand that Vanessa Beeley — who has become one of the most prominent dispensers of total and utter nonsense — called on Russia to carry out airstrikes against the White Helmets, and for me to be imprisoned for “enabling the destruction of Syria and its people”.

Others like Eva Bartlett have falsely accused the White Helmets of either being a figment of Hollywood’s imagination, or staging their videos.

Patrick Hilsman, a freelance journalist who has visited rebel held territory three times, laughed when I mentioned these claims about the White Helmets.

“I first encountered them by simply asking my driver what the building to our right was, and he said ‘It’s civil defense.’ We then walked in unannounced and encountered people without weapons, hard at the unglamorous work of digging a well,” he told me.

“I wasn’t helped by any think tank, no one told me what to say, no one warned the rescuers to start acting for the freelancers with their crappy cameras.”

Unfortunately, however, pro-Assad/Russia loons and propagandists have been so effective in muddying the waters, casting aspersions on Assad’s victims, and deflecting criticism away from this century’s most brutal dictator that they undermine any coordinated and sustained international effort to protect the Syrian people from a genocide.

So I asked a number of Syrians what damage these debunked conspiracy theories have imparted on the Syrian people and the pro-democracy revolution.

“This propaganda facilitates the gas attacks, hospital bombings, sectarian cleansing, and so on, “Robin Yassin-Kassab, co-author of Burning Country: Syrians in Revolution and War, told me.

“It also contributes to the general demonization of Muslims and Arabs in our culture. Beyond hurting Syrians, Arabs and Muslims, it is also damaging our civic and political life in the West, but the main purpose of this propaganda, because it has been carefully planted and guided, is to distract attention from the crimes committed by Assad and the Iranian and Russian occupations against civilians in Syria, and to prevent solidarity with those victims.”

When I interviewed Alaa al Ahmad, a Syrian journalist, he told me finds it deeply distressing to read pro-Assad Westerners describe him and the 300,000 other Syrians he is trapped alongside with in besieged Eastern Ghouta as a “terrorist,” asking, “Am I terrorist because I demand a civil state and I fight the factions that seek to establish an Islamic caliphate or the like?”

Qusay Noor, another Syrian journalist who is documenting the Assad’s regimes crimes against humanity in Ghouta also believes these conspiracy theories are meant only to smear Assad’s opposition as “terrorists,” and thus have only empowered Assad’s authoritarian rule, setting back the ideals of the revolution.

Ultimately, these conspiracy theories will evaporate any international pressure on the Assad regime, and at a time when Syrians need that pressure the most.

“It is essential the international community remains united with those in Syria who want a democratic solution, free from Assad and free from terrorism. That is why we need the international community to apply pressure on Russia to cease its bombing and its support for Assad, so that we can work towards a peaceful political settlement,” writes Mardini.

And when all has been said and done, a peaceful political settlement was the only thing demanded of Assad in the first place, seven long and bloody years ago. 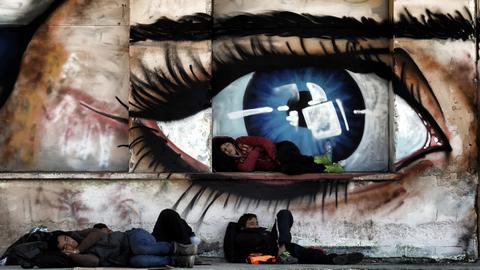 Essay: The alternate reality that enables genocide in Syria