Expulsion from the GCC and economic sanctions are all on the table after Qatar has refused to accept the Saudi-led bloc's demands. Even if the rivals manage to find a solution to the crisis, the GCC may still be irreparably damaged.

The crisis within the Gulf Cooperation Council (GCC) is unprecedented on many levels. The extensive use of a media and information campaign to magnify the Saudi/UAE-led bloc's pressure on Qatar to coerce Doha into accepting the onerous demands is one such exampe.

Yet Riyadh and Abu Dhabi could take harsher measures now that Doha has refused to capitulate to the demands of its GCC rivals. These include imposing new economic sanctions, and telling Saudi Arabia and the UAE's international commercial partners that they must choose between doing business with Qatar, or with the states blockading the emirate.

Additionally, on June 23 the UAE's Minister of Foreign Affairs, Anwar Gargash, warned on Twitter that Qatar and the GCC could part ways, hinting that the Saudi/UAE-led bloc could eject Doha from the council. Now that the second deadline set by the troika has passed and Doha has reiterated its rejection of the demands, the Foreign ministers of Egypt, Saudi Arabia, the UAE, and Bahrain are in Cairo to discuss what measures are actually to be taken to step up pressure on Doha.

It has become imperative to divorce rhetoric and hard talk from the tangible steps being discussed in the Egyptian capital.

New economic and financial sanctions seem in order. Saudi, Emirati, and Bahraini banks might receive official guidance to pull deposits and interbank loans from Qatar, thus worsening the volatility shown by the Qatari Riyal in the first two weeks of the crisis and by the financial market in general. Already several banks in the United Kingdom including Lloyds Bank, Barclays and Tesco Bank declared they partially stopped dealing in Qatari riyals as their third party supplier had ceased trading the currency as of June 21.

Another likely decision could be to expand the list of sanctioned entities to more individuals, banks and businesses, on the blueprint of the sanctions imposed on Iran and Russia.

However, a blanket sanction regime involving third parties seems highly unfeasible. Big trade partners, and in particular energy companies from the United States, Europe, and Japan would strongly object to such an imposition and put pressure on their own governments as well as on regional ones to avoid it.

Red flag measures might include pressuring Oman into refusing permission to dock shipments of Qatari LNG, and the Egyptian government raising fees and disrupting the transit of such shipments through the Suez Canal towards Doha's European customers.

One can also expect some political maneuvering from the blockading countries. The most drastic hypothesis circulating among analysts has been that the whole operation is aimed at staging a palace coup that would place a more complacent member of the Al Thani royal family on Doha's throne. Some in Riyadh and Abu Dhabi are convinced that Qatar's Emir Tamim is greatly under the influence of his predecessor/father, Hamad bin Khalifa, the architect of Qatar's proactive and independent foreign policy.

Although several UAE officials have stated that there is no plan to militarize the row and that the blockading countries do not want "regime change" but "behavioural change" in Qatar, the concern in Doha is palpable.

Qatari officials have repeatedly stated that the presence of reinforced Turkish troops in Qatar has helped to deter an invasion. To some extent, from the Saudi-Emirati perspective, attempting to push a different Al Thani on the throne might be more convenient than ejecting the country from the GCC. Such a move would effectively push the tiny – but extremely wealthy emirate – into Iran's sphere of influence and, with it, its entire political network of groups close to the constellation of political Islam – some of those influential in key theatres thorough the region.

What is worth noting is that, aside from what measures could be adopted today, this row has already caused long-lasting, perhaps irreparable, damage to the GCC as its core founding rationale, the idea that the council would protect the stability of its members against any threat to stability, is cogently and openly put into question.

Even if the monarchies can find a way to settle their differences, the personal relationship among the rulers of the six countries, key to the functioning of the GCC, appears compromised. While the two powerful crown princes of Riyadh and Abu Dhabi, Mohammad bin Salman and Mohammad bin Zayed, seem to be on the same page, one that is unsympathetic to Doha's Emir, the two more senior rulers of Kuwait, Sheikh Sabah al Sabah, and Oman, Sultan Qaboos bin Said, the last representatives of the old guard and of the first generation ruling style, seem to be deeply uncomfortable with either side and with the entire crisis.

In fact, after today, the GCC might have been effectively broken from within. 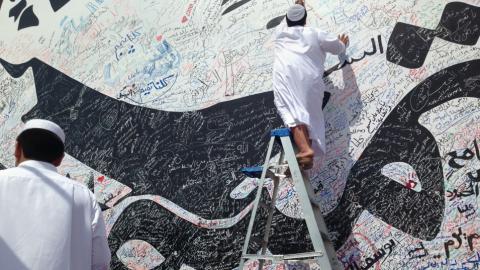