Many argue that uncontrolled hunting in the north of the country and with it the consumption and sale of bushmeat drives the outbreaks.

For the ninth time in over four decades, the Democratic Republic of Congo (DRC) is once again under the spell of the Ebola Virus Disease (EVD), a deadly epidemic that has already claimed 25 lives and infected 55 people.

Various reasons and theories are being given for the recurrence of Ebola in this vast, resource-rich Central African nation. However, one main reason that is scientifically proven is the bushmeat (meat from non-domesticated animals), which populations from the northeast and northwest of the DRC would ‘kill’ to have on their plates day and night.

The DRC has 135 million hectares of rainforest, where thousands of animal species are found, and where anyone is free to hunt as much as they like. No permit is needed and no regulations exist. Communities living deep in these jungles and those living around these areas say they have no choice but to hunt for food, and to sell to make ends meet.

Anyone shopping at the marketplaces in cities such as, among others, Mbandaka, Kisangani, Isiro, Bumba, Bunia, Gbadolite and Bikoro–the epicenter of the current episode–will be struck by the abundance of bushmeat on display there being sold on the cheap.

The meat ranges from all types of apes, including chimpanzees, bonobos and gorillas, to bats, antelopes, turtles, snails, cobras, crocodiles, duikers (a type of antelope), buffaloes, pangolins, porcupines, elephants, among others.

While hunters go to the forest to hunt other types of animals, the carcasses of elephants are left behind by poachers who take their trophies (ivory) and disappear without trace. The hunters then come and pick up the carcasses and return to their villages to share the spoils and sell the remaining meat.

It is worthwhile to note that the bushmeat trade is a lucrative business in the DRC, which goes beyond jungles and villages to reach the capital Kinshasa and neighbouring countries such as Congo Brazzaville, the Central African Republic (CAR), South Sudan and Uganda.

So, if a bushmeat is infected by Ebola—as is always the case when an episode of disease occurs in this country—it could reach four to five countries through the meat trade.

Scientifically it is thought that the fruit bats of the Pteropodidae family are natural hosts for the Ebola virus. The disease is then transmitted to other animals who have had close contact with these bats. If an infected bat or other animal found ill or dead in the rainforest is taken to the village by a happy hunter, chances are that the virus will be transmitted by anyone who eats that infected meat – or wherever it is sold.

This is how it goes from an isolated case to an outbreak.

Now, the solution here could lie in the government and the international community coming together to regulate hunting in DRC’s rainforests.

Introducing hunting permits will cause a massive uproar and could lead to protests, and eventually to violence as the DRC’s largely untrained and trigger-happy security forces seem to only believe in the shoot-to-kill strategy.

It would be wise to embark on awareness campaigns in cities, towns and villages around the areas with the highest consumption of bushmeat.

Hunters should be called to order to change which game they hunting, and instructed not to scavenge dead animals found in the forest. Even if they kill ‘healthy’ animals, how in heaven’s name will they know that the animal is carrying a virus?

Therefore, the government should, with the help of the international community, set up veterinary health centres deep into the villages, where hunters can check if their prey is suitable for human consumption.

Another step would be to prohibit and criminalise the hunting of certain endangered species. A Red List drawn up by the UN and international NGOs experts can help in regulating hunting in the DRC and limit the damage of Ebola or any other viruses.

The DRC does have a law that prohibits the hunt of endangered animals, the law is flouted because people are hungry and live in extreme poverty. The warning signs should be a good reminder of things to come if anyone does not abide by the law.

Putting up warning signs in local languages that say, “don’t pick up dead animals in the forest, you could get sick if you and your family eat it”, “don’t kill bats, they could be infested with Ebola or another deadly virus”, or “don’t kill chimpanzees/elephants/gorillas, they are endangered animals and protected by law, killing or threatening to kill them could lead to lengthy jail terms and heavy fines”, might just work.

People must also be trained and deployed to these areas to ensure that nobody breaks the law. Of course, the jungles are huge, but that does not mean that hunters hunt everywhere because there are many areas of the DRC rainforests that remain untapped and undiscovered. Hunters know where they go hunting, specific areas where they are safe from lions and leopards.

Some will say it will be costly and will requires a heavy investment of resources, but it is worth it. Rather spend more to save lives than spend less or do nothing at all.

All the efforts currently being undertaken by the international community (contact tracing, social mobilization vaccination, among others) to stop the virus from spreading further, especially to the densely populated areas, should be applauded and acknowledged.

But more can, and should, be done. If the government is unable to do it, the international community should intervene.

Ebola should be tackled at its core, in the jungles, where the virus is being generated by the bats who become unwitting hosts to an outbreak among humans. 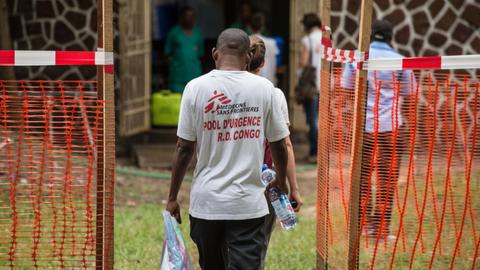