Battling Murray to take on Wawrinka in Antwerp final

Former world number one Murray returned to singles action on the ATP Tour in August following a career-saving hip resurfacing surgery in January and will look to lift his first trophy since 2017 in Sunday’s final.

Andy Murray took a step closer to a first title in arguably the toughest year of his playing career, grinding out a 3-6 7-5 6-2 win over Ugo Humbert on Saturday to reach the final of the European Open in Antwerp.

Former world number one Murray returned to singles action on the ATP Tour in August following a career-saving hip resurfacing surgery in January and will look to lift his first trophy since 2017 in Sunday’s final.

After appearing to struggle with a right elbow issue, Murray was pleased with his overall display.

“It’s been a long road to get back to this point. I certainly didn’t expect it to come so soon since I started playing again,” Murray told Amazon Prime.

“It’s been a big surprise to me and I’m happy to be through to the final.”

Standing in the 32-year-old’s way is Swiss Stan Wawrinka, who swatted aside Italian teenager Jannik Sinner 6-3 6-2 to advance to the title clash.

Three-time Grand Slam champion Murray will take inspiration from his better head-to-head record against Wawrinka, having won 11 of their 19 previous meetings, including the last one in Eastbourne a year ago.

Both players will be bidding to win their first title since 2017 with fellow three-time major winner Wawrinka having undergone surgery on his injured knee two years ago.

“Stan’s a brilliant player. We’ve played against each other in some big matches in the past in big tournaments,” Murray, whose hip issues proved troublesome during his French Open semi-final against Wawrinka two years ago, added.

“It was actually my match with him at the French Open when my hip problems really started. It was a tough five-set match... and my hip never really recovered from that, so it’s cool to be back playing against him in a final.

“He’s had his injury troubles as well the last couple of years and done great to get back to the top of the game.” 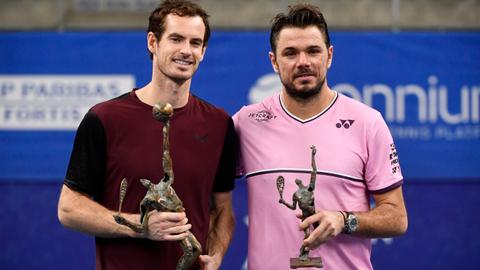