Amid potential US sanctions over the purchase of Russian S-400 air defence systems, Turkey now receives threats from EU members for its drilling operations in the Mediterranean Sea.

The European Union foreign ministers on Monday took a series of steps to intimidate Turkey over its gas drilling operations in the eastern Mediterranean Sea.

The dispute stemmed from overlapping claims to regional waters by Turkey and Greek Cyprus, an EU member that Ankara does not recognise as a sovereign state.

The EU minister announced suspension of negotiations on the Comprehensive Air Transport Agreement, which would create “open skies” or “open aviation area” between the parties, not to hold the Association Council and further meetings of EU-Turkey high-level dialogue.

They also endorsed a proposal to reduce the pre-accession assistance to Turkey for 2020 and invited the European Investment Bank to review its lending activities in Turkey.

The decision came amid expectations of possible sanctions by the United States over Turkey’s purchase of Russian air defence system, S-400s.

Threats by Washington and the EU against Turkey raise crucial questions whether the two allies are truly keen on resolving disagreements with Ankara.

Ankara has not recognised Greek Cyprus since a coup in 1974 ⁠— orchestrated by the military junta ruling Greece at the time⁠ — overthrew the Cypriot government and attempted to annex the island to Greece.

Then, Turkey militarily intervened in Cyprus to prevent the change in the island’s political status quo following the coup.

Therefore, neither Turkey nor the Turkish Republic of Northern Cyprus (TRNC) ⁠— which declared independence from the Republic of Cyprus in November 1983 and is only recognised by Turkey ⁠— accept the Greek Cypriot administration's claim to its own EEZ.

Since 2003, the Greek Cypriot administration has signed agreements with Egypt, Lebanon, and Israel to determine their respective Exclusive Economic Zone (EEZ) in the eastern Mediterranean.

Turkey has refused to recognise these agreements saying the Greek Cypriot administration does not represent all the inhabitants of the island and have begun sending drilling vessels to the region with the first one sailing last October.

The United States has long been threatening Turkey with sanctions to reverse its decision to purchase the Russian-made S-400 air defence system.

The threats include expelling Turkey from the F-35 fighter programme, a multi-national project of which Turkey is also a party, if it acquires the S-400 from Russia.

However, Turkey didn’t take back away from its commitments to the S-400 deal that Turkish President Recep Tayyip Erdogan and Russian President Vladimir Putin made in 2017, after years of failed efforts to purchase American-made Patriot defence systems.

US President Donald Trump expressed sympathy for Turkey's position when he met Erdogan at a G20 summit in Japan last month, saying Ankara had bought the S-400s from Moscow because his predecessor Barack Obama’s administration would not sell it Patriot missiles.

Turkey has repeatedly said that it's only seeking to guard its national interest and would respond to any possible US sanctions in kind.

A day after the EU announced its decision to unveil measures against Turkish drilling activities in the eastern Mediterranean, Turkish Foreign Minister Mevlut Cavusoglu said Turkey would send a fourth exploring vessel to the region “soon.”

"If you [EU] take such decisions against Turkey, we will increase activities. We have three ships in the eastern Mediterranean. We will send the fourth one as soon as possible," said Cavusoglu.

Prior to Cavusoglu's remarks, the Foreign Ministry slammed the EU for siding with Greek Cypus, while Turkish Cypriots have equal rights to the natural resources of the island.

"The decisions will not affect in the slightest our country's determination to continue hydrocarbon activities in the Eastern Mediterranean," the ministry added.

Turkish Cypriots have already offered to establish a cooperation mechanism with the Greek side to address sharing of hydrocarbon resources in the region, an offer the Greek Cypriot administration rejected.

Turkey, last week, expressed its support for the proposal and called the United Nations and the EU, and guarantor states to also take part to resolve the crisis by using such a mechanism.

On Sunday, Cavusoglu said Turkey would continue drilling if the Greek Cypriot government does not accept the Turkish Cypriot cooperation proposal.

An EU diplomat told Reuters Ankara could lose some 150 million of 400 million euros the bloc had earmarked for 2020 for everything from political reforms to agriculture projects to help Turkey prepare for eventual EU membership.

The EU had been due to give Turkey 4.45 billion euros between 2014 and 2020, but it cut and suspended some funding last year. It has frozen membership talks and negotiations on upgrading its customs union with Turkey, 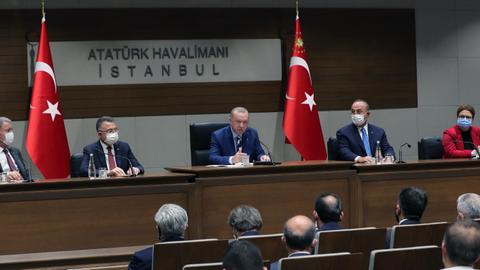