Turkey has eliminated more than 100 Syrian regime troops in swift retaliation for a deadly shelling that killed five of its soldiers in powderkeg Idlib province, Turkey's Defence Ministry says.

Turkey said it retaliated on Monday after "intense" shelling by Syrian regime forces that killed five of its soldiers and wounded five others in Syria's northern Idlib province, a marked escalation a week after a similarly deadly clash between the two sides.

Turkish forces hit 115 Syrian regime targets and destroyed "101 regime elements" in retaliation for the attack, the Turkish Defence Ministry said in a statement.

The retaliatory attack destroyed three regime tanks and two mortar positions, while one helicopter was also hit, the statement said.

The ministry said Turkish forces would continue to retaliate any attacks on its troops, which have observation posts in the far northwest of Syria.

Earlier, Turkish local media said the Turkish soldiers were targeted in Taftanaz in Idlib province, where Turkey has vowed to block the regime incursions.

Omer Celik, the spokesman for Turkey’s governing AK Party, said it was out of the question for the Turkish troops to vacate the observation posts in Idlib, adding that Turkey would continue to respond to "systematic" Syrian regime attacks.

Turkey "will carry out the necessary work to ensure that the [Syrian] regime retreat from the line it has violated with the aggression," Celik said.

This is the second such incident in a week after seven Turkish military personnel were killed in regime shelling in Idlib last Monday, provoking  a Turkish response in which more than 70 regime members were eliminated.

The attack came as a Russian delegation and their Turkish hosts met in Ankara for another round of talks on Idlib's situation, which according to Celik, failed to yield desired results.

Ankara has sent major reinforcements to Idlib region –– the last major enclave of opposition to regime leader Bashar al Assad –– where the regime offensive and its ceasefire violation has driven more than 700,000 people from their homes since December, towards the closed Turkish border.

Meanwhile, a rebel source said Syrian regime forces had shelled the Turkish military base at Taftanaz, and witnesses said Turkish helicopters flew into northwest Syria to evacuate the wounded.

A rebel commander said the opposition fighters launched a military operation on Monday against Syrian regime forces near Saraqeb with the help of Turkish artillery, with witnesses also reporting Turkish shelling of Syrian regime positions in the region.

Turkey, which already hosts 3.6 million Syrian refugees, says it cannot absorb any more and has demanded Damascus pull back in Idlib by the end of the month or face Turkish action. 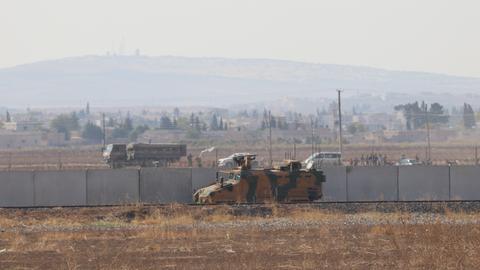