The US determined Hoda Muthana who joined Daesh wasn't a citizen because her father was a Yemeni diplomat when she was born in New Jersey.

A federal judge in Washington has agreed to move quickly on a lawsuit filed by a former Alabama woman who joined Daesh terror group and wants to return to the United States.

Hoda Muthana, 24, traveled to Syria over four years ago to join Daesh. She married a succession of Daesh terrorists and went on Twitter to encourage attacks on the West.

The family of Muthana filed suit last week against the Trump administration after the government said she wasn't a citizen and wouldn't be allowed to enter the US with her 18-month-old son.

Her family sought expedited action on her suit because Muthana is now in a refugee camp in Syria.

Judge Reggie Walton granted that Tuesday and scheduled a hearing for Monday.

The US determined Muthana wasn't a citizen because her father was a Yemeni diplomat when she was born in New Jersey.

But Hassan Shibly, a representative for the Muthana family and a staff member of the Council on American-Islamic Relations, tweeted that she was born in Hackensack, New Jersey, in October 1994, months after her father informed the US government he was no longer a diplomat.

Charles Swift, director of the Constitutional Law Center for Muslims in America, said her father's revocation of his diplomatic status meant Hoda Muthana was a US citizen. Swift said he planned to file a lawsuit over her case.

In a tweet the US President Donald Trump said he'd ordered his Secretary of State not to allow her back. 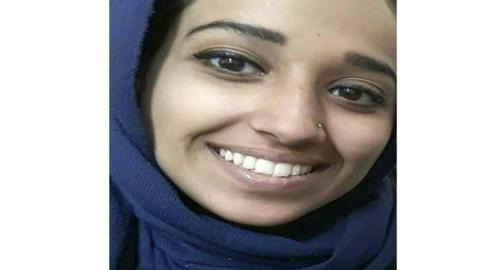 Trump takes credit for blocking Daesh bride from returning to US