The report also highlights the deep political polarisation surrounding Morales’ changing of the constitution to seek a fourth term, deep-seated racism against his Indigenous followers and traditionally weak institutions as aggravating factors.

An independent group appointed by the Inter-American Commission on Human Rights (IACHR) has accused Bolivia's security forces of carrying out "massacres" and "summary executions" during social unrest around the disputed 2019 elections.

Bolivia descended into chaos after Evo Morales stood for and won an unconstitutional fourth term as president in an election found to be fraudulent by the Organization of American States (OAS).

Clashes broke out between rival supporters and opponents of Morales's Movement for Socialism (MAS) party, and between security forces and protesters, leaving at least 37 people dead.

The worst of the violence came after Morales resigned and fled the country, leaving his supporters clashing with the military and police.

The report was presented by the Interdisciplinary Group of Independent Experts, which was set up by the IACHR, an autonomous organ within the OAS.

"The police and armed forces, separately and in joint operations, used excessive and disproportionate force, and did not adequately protect citizens from acts of violence," said the group's report.

"For their part, individuals promoted and carried out acts of violence and attacks on people, and public and private property."

The investigation centered on events from September 1 to December 31, 2019.

Two of the main events investigated were clashes in Sacaba, in the center of the country, on November 15 and El Alto, on the outskirts of La Paz, four days later.

In each incident 11 people died, with the investigatory group branding both as "massacres."

In Sacaba, the investigatory group was aided by Argentine forensics experts, which allowed them to "infer" that some of the dead were the victims of "summary executions."

The group said the social unrest "escalated and erupted into confrontations and violent aggressions" following "antagonistic speeches from recognised leaders."

The report highlights the deep political polarisation surrounding Morales’ changing of the constitution to seek a fourth term, deep-seated racism against his Indigenous followers and traditionally weak institutions as aggravating factors.

But it specifically faults Anez officials for utilising the judiciary and security forces to target opponents, often based on flimsy evidence. It also found evidence of female detainees being threatened with rape and subjected to genital touching.

Among those imprisoned was a maid found when police raided the abandoned home of a former top official, as well as Morales’ former cabinet chief, Patricia Hermosa, who had a miscarriage in custody while being denied medical attention, according to the report.

At the presentation of the report, President Luis Arce, like Morales a member of MAS, announced that the victims would be compensated.

He blamed Anez's interim government for "serious human rights violations, massacres and extrajudicial massacres" and said his government would take legal proceedings against them.

Anez and several of her interim ministers have been in pre-trial detention since March as the government seeks to have them prosecuted for an alleged "coup."

She has accused Arce's government of "political persecution." 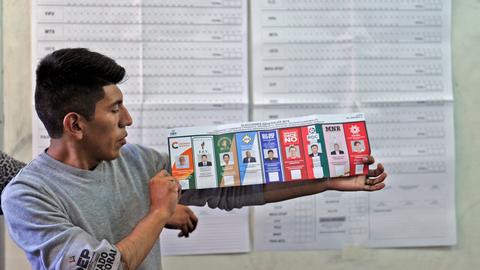