China has incarcerated the most journalists this year. Meanwhile, women journalists across the world have reported increasing instances of online harassment, ranging from threats of violence to sexual abuse.

2020 has been another deadly year for journalists.

At least 274 journalists were imprisoned this year, the highest number since the Committee to Protect Journalists began its survey in the 1990s.

The report by the non-profit also found that 26 journalists and media workers had been murdered in 2020, with Mexico listed as the world's most dangerous country for the press.

"It's shocking and appalling," CPJ Executive Director Joel Simon said in a statement.

"This wave of repression is a form of censorship that is disrupting the flow of information and fueling the infodemic," he added.

2020 marks five straight years in which at least 250 journalists have been held in custody, which the committee says illustrates a crackdown by repressive governments.

The worst offender was China for the second consecutive year, the survey found, with 47 reporters behind bars and where authorities only last week detained a Bloomberg employee on suspicion of endangering national security.

Trolls target women journos in Pakistan, ahead of #Elections2018 -- We call for all stakeholders to unite and defend women journalists from these undigified attacks - https://t.co/0UCm3sXbB8 pic.twitter.com/YRIt2z91iV

So far this year, 29 journalists have been killed, the committee said. That's up from 26 last year, but represents a decrease from earlier in the last decade, where 74 journalists were killed in both 2012 and 2013.

At least in part because of the coronavirus, fewer journalists are out in conflict situations where they could be hit by crossfire, said Courtney Radsch, the committee's advocacy director.

Twenty of the journalists killed so far this year were murder victims.

Three of the 47 journalists jailed in China were arrested for coverage related to China's response to the coronavirus pandemic, the committee said.

There were 27 jailings in Egypt, at least three related to coronavirus coverage.

Journalists in Egypt and Honduras died after contracting Covid-19 while in prison, the committee said.

Nearly all of the jailed journalists were covering stories involving their own country.

The committee said 36 of the jailed journalists were women.

Women bear the brunt of digital abuse – threatened with rape and exploited for pornography content – as the coronavirus pandemic drives ever more people online, media experts have said.

Women journalists in Pakistan this year have reported frequent instances of being targeted on social media by government officials and supporters for their work.

In Brazil,  journalist Patricia Campos Mello said she has repeatedly faced attack online for reporting on the government’s handling of the Covid-19 crisis.

“I had burnt copies of my book ... sent to me at home saying this would happen to me,” said Ayyub.

“If you are a critic of the government and a woman who also happens to be a Muslim, this ticks all the boxes to be humiliated and to be discredited.”

The Committee to Protect Journalists has been concerned that President Donald Trump's criticism of “fake news” in the US has influenced autocratic leaders in other countries.

The journalists' group hopes that President-elect Joe Biden can set a tone on the world stage by making a point of talking about press freedom.

Still, Radsch cautioned that “the world is not going to be undone all of a sudden just because we have a new US president”.

The committee has increasingly turned to Congress for help in emphasising press freedoms worldwide, Radsch said. She cited US Senators Ed Marke and Marco Rubio and California Democratic US Representative Adam Schiff as being supportive. 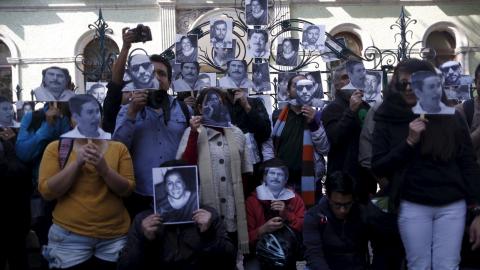 CPJ urges action against murder of journalists in Mexico