Plans for US Secretary of State Mike Pompeo to meet the foreign ministers of Azerbaijan and Armenia this week have raised hopes of an end to the fighting.

“The state border between Azerbaijan and Iran has been completely secured through liberation of the Agbend settlement,” he added.

READ MORE: NATO refuses to engage in the Armenian-Azerbaijan conflict

The state border between Azerbaijan and the Islamic Republic of Iran has been completely secured through liberation of the Agbend settlement. I congratulate the peoples of Azerbaijan and Iran on this occasion. Long live Azerbaijan’s glorious Army!

Plans for US Secretary of State Mike Pompeo to meet the foreign ministers of Azerbaijan and Armenia on Friday raised hopes this week that the two former Soviet republics would agree to end their deadliest fighting since the mid-1990s.

But those hopes have been dented by the continued heavy fighting in and around occupied Karabakh and by rhetoric from both sides.

Armenian Prime Minister Nikol Pashinyan said on Wednesday he could see no diplomatic resolution to the long-running conflict at this stage.

In a transcript of comments to the Nikkei newspaper published on Thursday, Aliyev said the prospects of reaching a peace settlement were "very remote."

Reiterating Azerbaijan's main condition for ending the fighting, Aliyev demanded promises that his country will be handed back control of occupied Karabakh, which broke away as the Soviet Union collapsed.

"So our main objective at these discussions will be to find out whether the Armenian leadership is ready to liberate our territories or not, and if ready, then when?" he said.

Relations between the ex-Soviet republics of Azerbaijan and Armenia have been tense since 1991, when the Armenian military occupied Upper Karabakh, also known as Nagorno-Karabakh.

Fresh clashes erupted on September 27, and the Armenian army has since continued its attacks on civilians and Azerbaijani forces, even violating humanitarian ceasefire agreements.

Four UN Security Council resolutions and two from the UN General Assembly as well as international organisations demand the "immediate, complete and unconditional withdrawal of the occupying forces" from the Azerbaijani territory.

In total, about 20 percent of Azerbaijan's territory – including Nagorno-Karabakh and seven adjacent regions – has been under Armenia's illegal occupation for nearly three decades.

The Organization for Security and Co-operation in Europe (OSCE) Minsk Group – co-chaired by France, Russia and the US — was formed in 1992 to find a peaceful solution to the conflict, but to no avail. A ceasefire, however, was agreed to in 1994.

World powers including Russia, France and the US have called for a sustainable new ceasefire. Turkey, meanwhile, has supported Baku's right to self-defence and demanded the withdrawal of Armenia's occupying forces. 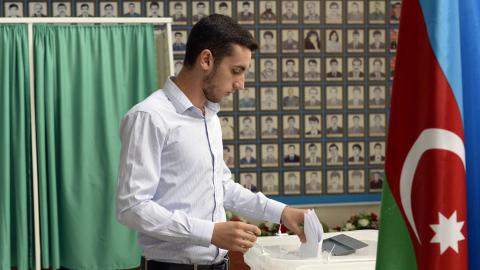