The six-month block will hold off sanctions levied against North Koreans linked to the country's ballistic missile program.

China and Russia have blocked a US push to impose United Nations sanctions on five North Koreans in response to recent missile launches by Pyongyang.

China's block came on Thursday before a new closed-door Security Council meeting on North Korea, also requested by Washington, and was followed by Russia's decision to similarly oppose the American proposal.

The United States quickly expressed its displeasure at the block.

"We have these sanctions for a reason," ambassador Linda Thomas-Greenfield said when asked about the Beijing and Moscow opposition.

"And for any member state to oppose putting sanctions... gives, in my view, the DPRK a blank check," she said, using an acronym for North Korea.

Under current UN rules, the block period lasts for six months. After that, another council member can extend the block for three more months and one day before the proposal is permanently removed from the negotiating table.

North Korea has launched a series of missile tests, asserting its "legitimate right" to self-defense.

Thursday's Security Council meeting on North Korea, the second in 11 days, was devoted to discussing a "response to the latest tests," according to Thomas-Greenfield.

"We have to respond to them. These actions are unacceptable," she told the Carnegie Endowment for International Peace, a research institute.

Last week, failing to reach consensus for a unanimous statement at the Security Council's first meeting after North Korea conducted a hypersonic missile launch test, the United States, Albania, France, Ireland and Britain, along with Japan, had jointly called on Pyongyang to refrain from any further destabilising action. 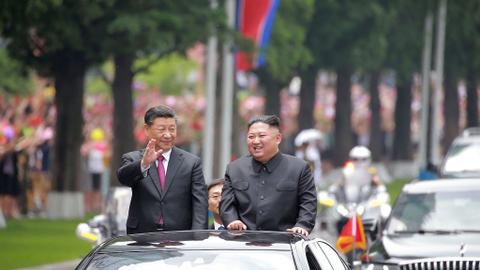