Dozens feared trapped as building due for repairs collapses in India

At least 13 people have been killed after a portion of a three-storey residential building collapsed on the outskirts of Mumbai city in Maharashtra state.

A residential building that was due for repairs has collapsed in central India, killing at least 13 people and trapping many others.

Nearly two dozen people are feared trapped under the rubble of the four-storey building in Maharashtra state that collapsed at around 2230 GMT (4 am local time on Monday), India's National Disaster Response Force said.

Some residents were trying to get out of the building, in the industrial town of Bhiwandi, 40 km (25 miles) northeast of Mumbai, after cracks appeared in it in the middle of the night, when it crashed down.

"Half of the building collapsed and nearly 25 to 26 families are feared trapped," Pankaj Ashiya, the municipal commissioner of Bhiwandi, told reporters.

At least 11 people were injured when the building collapsed, Ashiya said.

Ashiya said that the building was over 30 years old and needed repairs, which couldn't be carried out due to the coronavirus lockdown.

Rescue work in a cramped neighbourhood

Teams of police, city workers and members of the NDRF removed debris in the cramped lanes of the neighbourhood, trying to reach people calling out for help under the rubble, a Reuters witness said.

It was not clear what triggered the building – which had 54 apartments on three floors – to collapse.

"We heard a noise and I noticed that there were cracks on the floor," resident Sharif Ansari, 35, said.

"I woke up my neighbours and my wife and we rushed everyone down."

Ansari said he went back up to alert more people and was on the first floor with some other residents when the building came down.

"We jumped from there and managed to escape but there are at least another 60 people trapped," he said.

Indian Prime Minister Narendra Modi expressed his condolences on Twitter. "Praying for a quick recovery of those injured. Rescue operations are underway and all possible assistance is being provided to the affected," he wrote.

Maharashtra is one of India’s hardest-hit states by the virus with over a million reported cases. India has reported over 5.4 million coronavirus cases.

Building collapses are common in India during the June-September monsoon season when heavy rains weaken the foundations of structures that are poorly constructed or old. 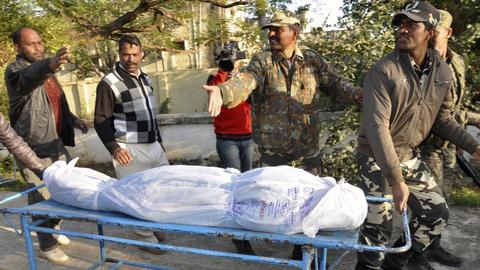