Malaysian PM Mahathir Mohamad called for Carrie Lam to quit after she invoked colonial-era emergency powers to ban protesters from wearing face masks. Her move to quell months of unrest sparked immediate rallies and vows to defy the new law.

The UN human rights office said on Friday that any new government measures to cope with protests in Hong Kong must be grounded in law and protect the right to freedom of assembly.

Any use of force should be exceptional and only in compliance with international standards, including the principles of necessity and proportionality, UN human rights spokeswoman Marta Hurtado told a Geneva briefing.

Hong Kong's embattled leader Carrie Lam invoked colonial-era emergency powers on Friday for the first time in more than 50 years, in a dramatic move intended to quell escalating violence in the Chinese-ruled city.

Lam said a ban on face masks would take effect on Saturday under the emergency laws that allow authorities to "make any regulations whatsoever" in whatever they deem to be in the public interest.

Hurtado, asked about the measures, said, "Any restriction must have a basis in law and be proportionate and as least intrusive as possible. Freedom of peaceful assembly is a fundamental right and should be enjoyed without restriction to the greatest extent possible."

The use of firearms was only acceptable as a "last resort," and only to protect against an immediate threat, she added.

"It is ironic that a colonial-era weapon is being used by the Hong Kong government and the Chinese Communist Party," said.

The last time the law was invoked was during the 1967 riots — a period where more than 50 people were killed in a year-long leftist bombing and murder spree.

Malaysian Prime Minister Mahathir Mohamad said on Friday Lam should step down and he predicted China would take action to end the demonstrations.

Growing opposition to the Hong Kong government has plunged the financial hub into its biggest political crisis in decades and poses the gravest popular challenge to Chinese President Xi Jinping since he came to power in 2012.

Speaking at a conference in Kuala Lumpur, Mahathir, referring to Beijing, said Lam "has to obey the masters and at the same time she has to ask her conscience."

"I think best thing is to resign," Mahathir said, according to a recording of comments, heard by Reuters, that he made when asked what advice he might give Lam.

Mahathir also said he expected China to take action against the protesters, drawing a parallel to student protests in Tiananmen Square in 1989.

British Foreign Secretary Dominic Raab said on Friday that political dialogue was the only way to resolve the situation in Hong Kong.

"While governments need to ensure the security and safety of their people, they must avoid aggravating and instead reduce tensions," Raab said in a statement.

Yang said the protests were evolving into a revolution with foreign intervention.

Lam said she had made the order under the Emergency Regulations Ordinances, a sweeping provision that grants her the ability to bypass the legislature and make any law during a time of emergency or public danger.

"We believe that the new law will create a deterrent effect against masked violent protesters and rioters, and will assist the police in its law enforcement," Lam said.

But as soon as the law was announced masked demonstrators built barricades in the heart of Hong Kong's commercial district and began holding flash-mob rallies in multiple districts.

The largest impromptu rally on Friday broke out in central Hong Kong, where many blue-chip international firms are based, as thousands of protesters blocked roads, erected barricades and built street fires.

At one point a banner celebrating 70 years of Chinese Communist Party rule was torn down and torched.

Online forums used by protesters also filled with anger and vows to hit the streets over the upcoming three-day weekend.

"Youngsters are risking their lives, they don't mind being jailed for 10 years, so wearing masks is not a problem," a 34-year-old office worker wearing a surgical mask, who gave her first name as Mary, said.

Critics said the move was a major step towards authoritarianism for Hong Kong, which has been governed by China under a "one country, two systems" framework since British colonial rule ended in 1997.

"This is a watershed. This is a rubicon," pro-democracy lawmaker Claudia Mo said.

"And I'm worried this could be just a starter.

More draconian bans in the name of law could be lurking around the corner." 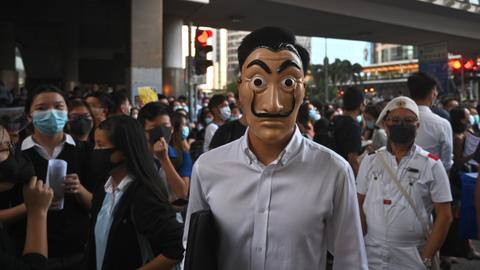 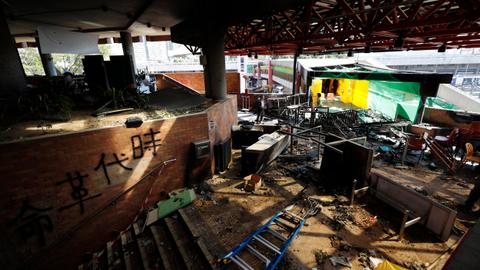