US and Taliban officials will reconvene on Tuesday to continue peace talks described as the "most productive session" by the top US negotiator Zalmay Khalilzad leading the discussions to end the Afghan war.

The US peace envoy to Afghanistan said Saturday that for the first time he can report "substantive" progress on all four issues key to a peace agreement in the country's 17-year war, calling the latest round of talks with the Taliban the "most productive" so far.

Zalmay Khalilzad said talks with the Taliban had been exclusively about troop withdrawal and anti-terrorism guarantees.

But on Saturday, he said the discussions have broadened to include a timeline for both intra-Afghan negotiations as well as a cease-fire. He declined to give details, however. The talks were to resume on Tuesday.

Khalilzad said it will ultimately be up to Afghans to decide among themselves the agenda for negotiations as well as the terms of a ceasefire.

TRT World spoke to Omar Samad, a former spokesman for the Afghan Foreign Ministry, for his take on the ongoing peace efforts.

So far, the Taliban have refused to talk directly with the current Afghan government, considering it a US puppet. The insurgents, however, have consistently said they will sit down with any Afghan, even a government official, but as an ordinary citizen and not as a government representative.

The Taliban currently control nearly half of Afghanistan, and are more powerful than at any time since the October 2001 US-led invasion.

More than 2,400 US service personnel have died in Afghanistan since the coalition invaded to oust the Taliban and hunt down al-Qaida chief Osama bin Laden following the September 11, 2001, attacks on the United States.

In a press briefing in Doha, where he has been meeting the Taliban, Khalilzad said he hoped that all-Afghan talks that begin Sunday — also in Doha — will be a precursor to negotiations to hammer out the framework for Afghanistan's post-war future — what he called the "actual give and take about the future of the country, the political roadmap that will take place during negotiations."

He said Washington's "aspiration" is to have that framework in place by September 1 and ahead of the Afghan presidential election scheduled for September 28.

Khalilzad refused to be drawn into specifics but said an agreement on the framework for Afghanistan's future would be akin to a blueprint that would lay out issues important to all sides in the conflict, including constitutional revisions, interim government versus elections, the fate of militias, a cease-fire and even whether the country should be named the Islamic Republic of Afghanistan or the Islamic Emirate of Afghanistan.

A visit by US Secretary of State Mike Pompeo to Afghanistan's capital, Kabul, at the end of last month seemed to give fresh impetus to peace efforts and September 1 emerged as a target date for a peace deal to end America's longest running military engagement.

Since then, Khalilzad has held scores of talks with the Afghan government in Kabul and abroad, with the Taliban as well as with Afghanistan's neighbors — including Pakistan.

Khalilzad said the atmosphere during recent talks was the best yet, with both sides finding shared humor as opposed to previous talks which had on occasion ended in acrimony, shouting and the occasional walk out.

Several prominent Afghan figures left Kabul for Doha on Saturday ahead of much-anticipated all-Afghan talks to begin Sunday. Those discussions are co-sponsored by Germany and Qatar, and include the Taliban.

An April round of intra-Afghan talks were scuttled after the two sides could not agree on participants. The Afghan government had submitted a list of 250 people. The Taliban likened it to a wedding party.

This time the Taliban say 60 people will participate.

Attaullah Rahman Salim, the deputy head of the government's high peace council, said 64 would be sitting around the table.

The list includes senior members of the government, former mujahedeen who fought the Soviet in the 1980s as well as former government officials, former ambassadors, civil society representatives and a small number of women.

Khalilzad said for the first time the Afghan-to-Afghan talks include senior members of President Ashraf Ghani's government, even if they are there as ordinary Afghans. Khalilzad said the exchange allows both sides to get to know the other, which he hopes will lead to negotiations.

Participants at the table will be there "on equal footing" and not as government representatives, according to the German and Qatari sponsors of the talks.

Afghan President Ghani, who has been conspicuously quiet about the upcoming intra-Afghan dialogue, has consistently demanded the Taliban talk directly with the government. 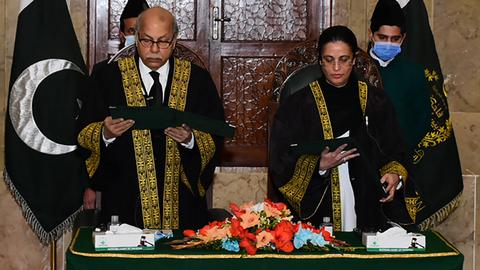