The UN chief's statement, North Korea's top diplomat said, was "oblivious of the purpose and principles of the UN Charter and its proper mission which is to maintain impartiality, objectivity and equity in all matters."

The North fired an intercontinental ballistic missile on Friday in one of its most powerful tests yet, prompting Guterres to urge Pyongyang to halt any further "provocative actions."

Foreign Minister Choe Son Hui responded on Sunday by expressing "my strong regret over the fact that the UN secretary general has taken a very deplorable attitude."

The UN chief's statement, Choe said, was "oblivious of the purpose and principles of the UN Charter and its proper mission which is to maintain impartiality, objectivity and equity in all matters."

She added that the episode shows that Guterres "is a puppet of the US."

Nuclear-armed North Korea has conducted a record-breaking blitz of launches in recent weeks, which Pyongyang — and Moscow — have repeatedly blamed on Washington's moves to boost the protection it offers to allies Seoul and Tokyo.

Since Kim declared North Korea an "irreversible" nuclear state in September, the United States has ramped up regional security cooperation.

"We recently warned the UN secretary general to consider the issue of the Korean peninsula on the basis of impartiality and objectivity," Choe said.

She added that the North had made clear that it would have to resort to "self-defence under the worrying security environment in the Korean peninsula and the region caused by the US and its vassal forces' dangerous military cooperation."

"Nevertheless," Choe said, "the UN secretary general shifted the blame for the case onto the DPRK rather than the US."

The missile flew 1,000 kilometers (620 miles) at an altitude of 6,100 km, South Korea's military said, only slightly less than the ICBM Pyongyang fired on March 24, which appeared to be the North's most powerful such test yet.

Later on Friday, Tokyo and Washington held joint military drills in the airspace over the Sea of Japan.

The UN Security Council on Saturday said it would discuss North Korea in a Monday meeting. 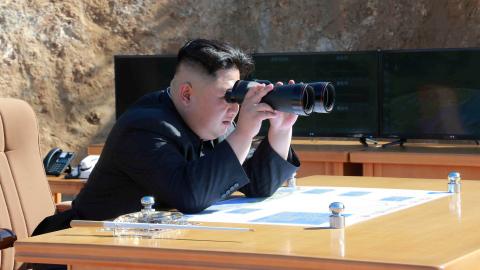