Soldiers and police fanned out across India-administered Kashmir on Monday to enforce a strict lockdown for a second straight day to stop anti-India protests and foil a call by pro-independence groups for a march toward India's main military garrison in the disputed region.

Indian troops patrolled streets in the region's main city of Srinagar and sealed off all the roads leading to one of India's largest military cantonments in the region.

Three popular Kashmiri resistance leaders, known as the Joint Resistance Leadership, called for Kashmiris to march to the army cantonment in 'kill us all' protests, following the killings of seven civilians and three rebels during an Indian counter-insurgency operation over the weekend.

Police and paramilitary soldiers in riot gear and carrying automatic rifles laid steel barricades and coiled razor wire on roads and intersections to cut off neighbourhoods in a bid to stop protests.

Authorities also stopped train services and suspended internet on cellphones in the region, a common tactic to make organising protests more difficult and stop dissemination of protest videos by Kashmiris.

Shops and businesses in other areas with no security restrictions closed to protest Indian rule.

Kashmiris must be allowed to decide their future. https://t.co/Y91PUVckh8

The killings and wounding of over three dozen civilians on Saturday angered Kashmiris and sparked massive anti-India protests and clashes at several places in the region.

Residents accused troops of directly spraying gunfire into the crowds and killing at least two civilians, including a teenage student, away from the battle site.

Police said in a statement that they regretted the killings but that the protesters had come "dangerously close" to the fighting.

Resistance groups who challenge India's sovereignty over Kashmir said the killings were part of India's state policy and called for three days of mourning and a general shutdown in Kashmir apart from Monday’s public march.

The Indian army has appealed for people to not heed the call.

The army said in a statement that it was "fighting terrorism and proxy war sponsored by Pakistan and its proxies in Kashmir," adding that its objective "is to bring peace and normalcy" in Kashmir.

Kashmir valley is witnessing a complete shutdown on the third consecutive day, to mourn the killings of seven civilians...

Meenakshi Ganguly, South Asia director at Human Rights Watch, said Indian authorities should investigate and prosecute those responsible for "indiscriminate use of force".

"Security forces are aware that villagers gather, protest during gunfights with Kashmir militants and have responsibility to ensure civilians are not at risk," she said in a tweet.

Pakistan, which like India, claims Kashmir in full but rules it in part, condemned the Saturday killings.

"Only dialogue and not violence and killings will resolve this conflict," Pakistan Prime Minister Imran Khan said, adding that his country would raise India's "human rights violations" at the United Nations.

#OIC General Secretariat expressed strong condemnation of the killing of innocent Kashmiris by #Indian forces in Indian-occupied #Kashmir (#IOK) where direct shooting at demonstrators in ​​Pulwama region claimed the lives of a number of innocent citizens: https://t.co/vHbpWj4Xby

India and Pakistan each administer part of Kashmir, but both claim the region in its entirety.

Rebels have been fighting Indian control since 1989. Nearly 100,000 people have been killed in the uprising and the ensuing Indian military crackdown.

Kashmiris deeply resent Indian rule and support the rebels' call that the territory be united either under Pakistani rule or as an independent country.

In recent years, mainly young Kashmiris have displayed open solidarity with the rebels and sought to protect them by engaging troops in street clashes during India's counter-insurgency operations despite repeated warnings from the Indian troops. 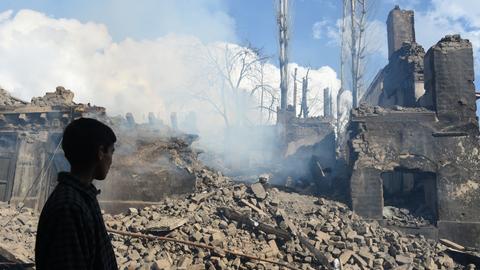