1
Fraud claims wipe $48B off India's Adani Group stocks
2
IBM to cut 3,900 jobs as it reorganizes business
3
Biden calls Republicans' economic plans dangerous for US economy
4
Asia’s richest man was shorted by a US research firm. Chaos ensued
5
Streaming firm Spotify to trim workforce in another blow to tech industry

With the exit poll indicating that Therese May's Conservative Party would not get the outright majority she sought to give her the authority to negotiate Brexit.

The British pound saw its biggest daily fall since January before recovering some ground on Friday after an exit poll unexpectedly showed Prime Minister Theresa May falling short of an overall parliamentary majority in Britain's election.

The shock of a projection that raised questions about how Britain will advance with its plan to leave the European Union, and whether any party could form a stable government, sank the pound initially by almost 2 percent against both the dollar and euro.

But rises in the vote for May's Conservatives in a handful of early results, along with the prospect that an opposition Labour-led coalition might engineer a softer "Brexit", helped the currency recover half of those losses.

"We only have four seats in at the moment but as soon as returning officers are telling us that the Conservatives are losing but lessening their losses in Labour safe seats, sterling is getting a bid," said Jeremy Cook, chief economist at the international payments company, World First.

Mohamed El-Erian, chief economic adviser at Allianz, said: "With initial exit polls pointing to the Tories (Conservatives) losing seats and that Prime Minister May's early election gamble is not paying off, markets are pricing in a more complex outlook for policy implementation, including Brexit."

The exit poll predicted the Conservatives, traditionally favoured by markets as pro-business and fiscally prudent, would win 314 seats in the 650-member parliament and the opposition Labour Party 266, meaning no clear winner and a "hung parliament".

A raft of analysts predicted more falls for the pound if the results were confirmed.

"The market will be praying that this exit poll has got it wrong," said Lee Hardman, a currency analyst with Japanese financial giant MUFG in London.

"Currency volatility is the best proxy for market fears. If the Conservative ship is sinking then the market will be looking for a life boat."

Investors' traditional views of whether the Conservatives or Labour would be good or bad for the pound, however, have been muddied in this election, not least by the prospect of Brexit talks due to start on June 19.

Some banks have said a high-spending Labour government could spur economic growth and cause the Bank of England to raise interest rates more quickly.

Some also argue that any Labour-led coalition might aim for a softer deal on Britain's planned departure from the European Union than the "hard Brexit" that markets have worried May would deliver.

"The pound is getting hit ... and that's probably a symptom of uncertainty," said Jason Ware, chief investment officer at Albion Financial in Salt Lake City, Utah.

"But if we get more of a softer Brexit or more of a globalist stance from the UK... it's good for Europe, the UK and U.S. assets." 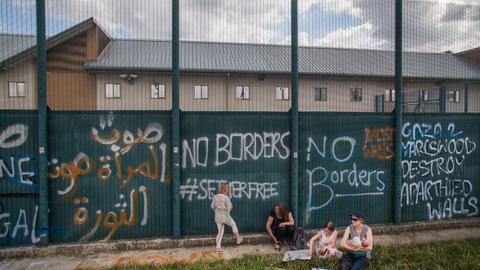 1
Fraud claims wipe $48B off India's Adani Group stocks
2
IBM to cut 3,900 jobs as it reorganizes business
3
Biden calls Republicans' economic plans dangerous for US economy
4
Asia’s richest man was shorted by a US research firm. Chaos ensued
5
Streaming firm Spotify to trim workforce in another blow to tech industry