Armenia to get new PM on May 8 after weeks of turmoil, says ruling party

Although it looks as though opposition leader Nikol Pashinyan will be the next Armenian prime minister, it's not a certainty.

The head of Armenia's ruling party in parliament said on Thursday that the country would get a new prime minister on May 8 because his party was ready to support whoever enjoyed the backing of one-third of lawmakers in a vote on that date.

Vahram Baghdasaryan, the head of the Republican Party in parliament, was speaking after holding talks with opposition leader and lawmaker Nikol Pashinyan.

Pashinyan wants to be prime minister and has led weeks of protests against what the opposition calls Armenia's 'ruling elite.'

Baghdasaryan said the Republican Party would support anyone on May 8, including Pashinyan, if they enjoyed the backing of one-third of lawmakers.

At present, Pashinyan is the only candidate for the position. He appears to have the support of more than a third of sitting MPs. Forty-seven members of the 105-seat parliament voted for him when the Republican Party blocked him becoming prime minister on Tuesday by not voting.

Despite Baghdasaryan's assurance, Pashinyan's elevation to the top job is not yet certain, as a second candidate for the prime minister's position could come forward ahead of next Tuesday's vote. 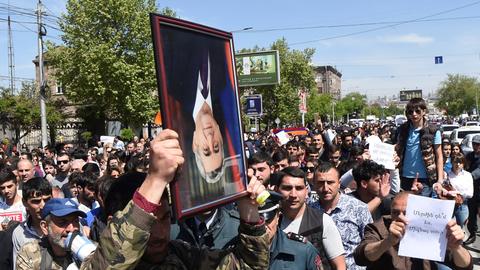