British PM Boris Johnson has won the backing of a majority of Tory MPs but his critics say that the rebellion, the largest of any sitting prime minister, has weakened his rule.

British Prime Minister Boris Johnson will seek to shore up his position by setting out a raft of new policies to senior ministers after he survived a confidence vote that revealed the scale of the threat to his position.

Johnson won the vote late on Monday by 211 votes to 148 - enough to avoid having to immediately resign but a larger than anticipated rebellion within his party that leaves him politically wounded and battling to win back the confidence of his colleagues and the general public.

Remove the “payroll” vote - and look at the free vote from backbenchers. Almost 75% of all Tory MPs not dependent on his patronage voted against him. This is the end for Boris Johnson. The only question is how long the agony is prolonged. @RestIsPolitics

His first challenge will be to convince his most senior allies, some of whom would have likely run to replace him if he had been forced out, that he will be able to move on from questions about his leadership.

Johnson's office issued a statement on Tuesday saying he would use the meeting to set out his vision for the coming weeks, including new policies to reduce the cost of childcare and to help more people buy their own homes.

"This is a government that delivers on what the people of this country care about most," Johnson said in the statement.

"We are on the side of hard-working British people, and we are going to get on with the job."

Tonight’s vote on Boris Johnson’s leadership will not provide any comfort to the millions of families pushed into poverty by the soaring cost of living, relying on food banks and struggling to pay the bills.

They need real change and policies to give them hope for the future.

Lawmakers in Johnson's party called the confidence vote after months of scandal over lockdown-breaking parties at the heart of government and criticism of his response to an inflation-fuelled surge in the cost of living.

The front pages of British newspapers offered little comfort that the vote was, as Johnson described it in the aftermath on Monday, a decisive result that allows him to refocus on his political priorities.

Boris Johnson, who has just suffered the worst result in a confidence vote of any sitting PM ever, describes it as "a very good result for politics and the country. It's a convincing result, a decisive result.”

"If Mr Johnson is to avoid leading the Tories (Conservatives) to a calamitous defeat in the next election, he will need to show a degree of grip and focus that has been largely absent so far in his premiership ... ," it said.

The rules of Johnson's Conservative Party mean he is safe from another confidence vote for the next 12 months, but those rules could technically be changed if there is enough political will to do so.

In 2018, Johnson's predecessor Theresa May won a larger percentage of a similar confidence vote only to resign six months later. 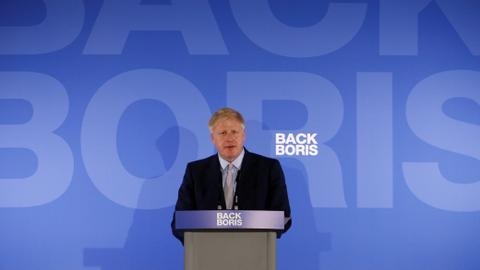