The first monkeys have been created in a lab. Are humans next?

The work brings possibility of human cloning closer, but the scientists behind the breakthrough say that's not the aim.

Scientists in China have created the first monkeys cloned by the same process that produced Dolly the sheep more than 20 years ago, a breakthrough that could boost medical research into human diseases.

The two long-tailed macaques (Macaca fascicularis) named Hua Hua and Zhong Zhong were born at the Chinese Academy of Sciences (CAS) Institute of Neuroscience in Shanghai, and are the fruits of years of research into a cloning technique called somatic cell nuclear transfer.

"The barrier has been broken by this work," co-author Muming Poo, director of the Institute of Neuroscience of CAS Center for Excellence in Brain Science and Intelligence Technology, told AFP.

Until now, the technique has been used to clone more than 20 different animal species, including dogs, pigs and cats, but primates have proven particularly difficult.

The birth of the now six- and eight-week old macaque babies also raises ethical questions about how close scientists have come to one day cloning humans.

Humans could be cloned by this technique, in principle, said Poo, though this team's focus was on cloning for medical research.

One day, the approach might be used to create large populations of genetically identical monkeys that could be used for medical research – and avoid taking monkeys from the wild.

"Their genetic backgrounds are all variable, they are not identical, so you need a large number of monkeys. For ethical reasons I think having cloned monkey will greatly reduce the (number of) monkeys used for drug tests."

'Much failure' before success

"The method used for these experiments is similar to that used to clone Dolly," in 1996 but with several updates," said William Ritchie, an embryologist on the team that cloned Dolly the sheep at the Roslin Institute of the University of Edinburgh.

The process involves removing the nucleus from a healthy egg, and replacing it with another nucleus from another type of body cell. The clone becomes the same as the creature that donated the replacement nucleus.

"We tried several different methods, but only one worked," said senior author Qiang Sun, Director of the Nonhuman Primate Research Facility at the Chinese Academy of Sciences Institute of Neurosciences.

"There was much failure before we found a way to successfully clone a monkey."

Adult donor cells were attempted, but those clones died within hours of birth.

What worked as replacement nuclei were cells that came from foetal connective tissue.

"The SCNT procedure is rather delicate, so the faster you do it, the less damage to the egg you have, and Dr Liu has a green thumb for doing this."

Other monkeys have been cloned in the past, by a different and simpler technique called embryo splitting, which mimics how twins arise naturally.

The first primate ever cloned this way was Tetra, a rhesus monkey born in 1999.

Embryo splitting can produce a maximum of four at a time, while the new technique could in theory clone far more.

Still, the process that produced Hua Hua and Zhong Zhong remains "very inefficient and hazardous," because the two babies were the only born from a group of 79 cloned embryos, said British scientists Robin Lovell-Badge, group leader of The Francis Crick Institute.

"While they succeeded in obtaining cloned macaques, the numbers are too low to make many conclusions," said Lovell-Badge, who was not involved in the study.

"With only two produced it would have been far simpler to just split a normal early embryo into two, to obtain identical twins."

Nor do the findings, published in the US journal Cell, bring scientists any closer to human cloning, Lovell-Badge argued.

"This clearly remains a very foolish thing to attempt, it would be far too inefficient, far too unsafe, and it is also pointless."

Darren Griffin, professor of genetics at the University of Kent, greeted the paper with "cautious optimism" and called it "very impressive" from a technical standpoint.

"The first report of cloning of a non-human primate will undoubtedly raise a series of ethical concerns, with critics evoking the slippery slope argument of this being one step closer to human cloning," he added.

"The benefits of this approach however are clear. A primate model that can be generated with a known and uniform genetic background would undoubtedly be very useful in the study, understanding and ultimately treatment, of human diseases, especially those with  a genetic element." 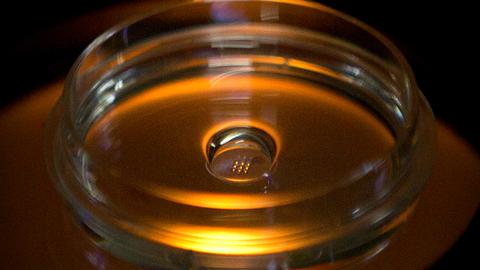