Algeria: 'The wall of fear has been broken'

“Does he even know he is running for a fifth term?” asked Djamila, referring to her President Abdelaziz Bouteflika, who has just returned to Algeria after being hospitalised in Geneva.

He has been in office since 1999. Bouteflika has not spoken in public in seven years. His office insisted his visit to Geneva was for routine medical checks, but suspicion has grown that his condition is worsening.

On Monday afternoon, his office announced the elections scheduled for April 19th had been postponed, and that he would not run for a fifth term. The cries from Algerians around the world have been heard.

PhD student Djamila, studying Politics and Film Studies at Reading University is one of the 50 top scoring students of Algeria, sponsored to complete her studies in the UK.

She travelled to London on Saturday 10 March after hearing about the protest on Facebook and joined more than a thousand Algerians from the UK community in the capital’s Trafalgar Square.

The protestors were there to stand in solidarity with the hundreds of thousands in Algeria who have been protesting against President Abdelaziz Bouteflika’s bid for re-election. This was the third consecutive Saturday, and the crowds have been getting bigger every week.

Since Algeria won its independence from France in 1962, a one-party system has been in place spearheaded by the National Liberation Front (FLN), which went from being an anti-colonial movement to a military autocracy.

In 1988, as government subsidies were removed, the price of basic foodstuffs rose which led to riots erupting in which 500 people were killed. As a result of the popular uprising, long overdue reforms were promised, and the opposition party FIS, the Islamic Salvation Front, was allowed to enter politics officially.

Soon after they won local elections in 1990, and then the presidency in 1992, however, neither the army Generals nor their Western backers at the Elysee were prepared to accept the results of the vote and crushed the popular uprising.

Algeria went on to suffer a horrifying civil war, known only as the ‘Black Decade’, with a death toll of more than 200,000 men, women and children. The violent response to the election of an Islamist party was echoed in Egypt when Morsi was arrested after winning the 2012 elections and was replaced by President Sisi through a military coup.

“As millennials, we have known nothing but his regime,” Djamila continued, “the corruption is widespread, leaving nothing for the health or education budgets. They say that education has the second largest budget, but we don’t see it. The country has so much wealth, but all of its people are poor. So where has all the money gone? One month ago, if you criticised Bouteflika, people would hush you. It was taboo. Now, if you speak in support for him, people will hush you. Finally, the wall of fear has been broken.”

Thousands of Algerians every year risk their lives crossing the Mediterranean, heading with hope towards Europe, dreaming for a future where they can thrive and not just survive, where they can work hard, support their families, reinvest in Algeria, and craft better opportunities for the next generations.

Seventy percent of Algeria’s population is under 30, and youth unemployment rates have hovered around 29 percent throughout the decade. Nepotism is rife stifling social mobility and leaving the youth apathetic and frustrated.

Shaharazat, a mother of three, explained that she wanted to change to save the youth of Algeria: “We don’t want to see our sons die at sea anymore. We want our youth to have opportunities in Algeria. The fear from the Black Decade has made us cautious of instability, but now we are saying enough is enough. We have learned from the suffering and death that we do not want it again, we will insist on having a peaceful revolution.”

People who were protesting on Saturday came from all over the UK. Imene, who came from Bath explained she’d heard about the demonstration via Facebook.

“It’s amazing,” she said of the atmosphere. She hopes that people will talk about the “army - which is the main manipulative force in Algeria.”

Protests in Algeria have been rare throughout the 20-year rule of Bouteflika, and even rarer that they are tolerated. Since announcing his candidacy for a fifth term as president on February 10th, demonstrations have snowballed across the country.

Poverty and unemployment have boomed in Algeria over the decade, the largest country in Africa, which holds over 12 billion barrels of oil reserves. Frustration is aimed at the government’s failure to diversify the economy, nor invest the profits from petroleum into education, infrastructure or health care.

An ex-employee of the state-owned petroleum company Sonatrach, who had joined the demonstration in London, explained that he had witnessed where the money was going.

Millions of pounds worth of funds had disappeared while agreeing on an extraction contract with a French company years ago, he told me under the condition of anonymity. He resigned, unwilling to be complicit, but never reported it out if fear of the repercussions, and the lack of faith in the judicial system’s ability to enforce accountability.

This same weekend, Sonatrach employees in Algeria, who are paid less than their Western colleagues, have protested on-site at oil fields across the Sahara.

Idir, a Professor of Business at London South Bank University, highlighted the president’s health as the trigger for the sudden eruption of demonstrations, explaining that people are finally voicing a long-held discontent for the government’s failure to enrich the people.

“He could not even bring his candidacy personally to enrol, how could he run the country? We have millions of strong people in our country, and we need a strong leader. He makes us a global joke. The Ministry of Justice in our country is just a building, a facade. So is he. What is behind the facade? We deserve the right to see.”

Idir emphasised that social media has catalysed the demonstrations and that the regime does not understand its power. Across the world, spread through Facebook, Algerian diasporas are taking to the streets, singing the same chants that are sung in Algeria, echoing the same calls: “No fifth term Bouteflika, you are thieves, you have eaten the country.”

Young Algerian men, dancing and singing to the beat of traditional hand-held instruments posed for selfies while kissing London Metropolitan policeman on the cheeks, mimicking the same photographs that have gone viral on the internet from demonstrations in Algeria.

Police, lawyers, and professors across Algeria have also demonstrated, joining the people in calling for extensive reform.

“This is a Family Affair” read one placard, emphasising a clear message that no foreign intervention is being requested or welcomed. Many shared this viewpoint, including Djamila the PhD student, who made it clear that no rescue package from a foreign nation in these moments of instability would be beneficial for the Algerian people.

“They will only seek their own interests. We as Algeria have had our resources colonised since the French invasion 189 years ago. We want independence now, real independence. This is the first step, we will continue to make our voices heard until he resigns. The second step will be to work out how to establish a real democracy, where we can choose who leads us.”

Djamila’s friend Fatima had travelled even further to join the protest, taking the train from York where she is enrolled in Women’s Studies. She is adamant that women need to be fully involved in the process of reforming institutions and complains that the female ministers currently elected have failed to support women’s interests.

“There are a lot of issues with family law. Women need to be involved in the discussion for reform.”

Fatima is researching female vloggers from Algeria, who, as she explains, “against all odds, are being outspoken in a society where women are not encouraged to speak out in the same way as men.”

Sofia Benlemmane, based in France, is a vlogger visiting London and was live-streaming Saturday’s demonstration to thousands of viewers across the world via Facebook.

“Bouteflika cannot violate the Constitution, rule 102 forbids a further term of Presidency.” Article 102 of Algeria's Constitutional Law, states that if an illness "prevents a leader from governing the country (they) must step down".

Sofia explained that she demands the regime cancel the upcoming elections on April 19th, and called for a transitional phase in which new candidates could be selected democratically, and a viable opposition offered to the people. Her first request has been granted, leaving many wondering what will happen next.

With opposition parties and candidates being stifled by the regime’s stronghold, there is no clear answer on who could lead the way should Bouteflika resign.

Billionaire tycoon Rachid Nekkaz, an opposition figure and favourite amongst the youth, was arrested for trespassing at the hospital in Geneva where Bouteflika was seeking medical help. His bid for candidacy was refused due to his previous possession of French citizenship. He was among the 10,000 Franco-Algerians who attended a demonstration at the Place de la Republique in Paris on Sunday after he was released by Swiss police.

Algerians across the world are protesting to demand transparency and visibility in the face of a closed, opaque and destructive power, and have announced general strikes in all sectors of social life and the continuation of protests.

Uncertainty is widespread, with warnings of ensuing chaos, violence and war from Bouteflika’s office, echoed by neighbouring leaders such as Egypt’s President Sisi.

Despite the questions and obstacles ahead, optimism overwhelmed the crowd in Trafalgar Square, hopeful that peace would prevail in Algeria, and that change would provide a better future.

There was a moment at Trafalgar Square when Algerian and Sudanese protesters bumped into each other while both chanting anti-government slogans. This comes at a time when a late-blooming Arab Spring of sorts has arrived at both African nations. Algeria and Sudan thought they survived the 2011 wave of protests that hit neighbouring Tunisia, Egypt and Libya and who ousted their long-ruling leaders.

Next Saturday in London, UK Algerians will be joined by UK Syrians, who will be demonstrating against the Assad regime. For eight years, the regime has been committing unbearable atrocities against the people of Syria, who rose up peacefully in 2011, demanding an end to his dictatorship.

Here in Trafalgar Square, underneath the ever-present and towering Nelson’s Column, the demonstrations will likely meet, unified in their call for a free and democratic future.

Jo Daniel is a freelance journalist and photographer based in London, covering political and social issues in Europe, North Africa and the Middle East. 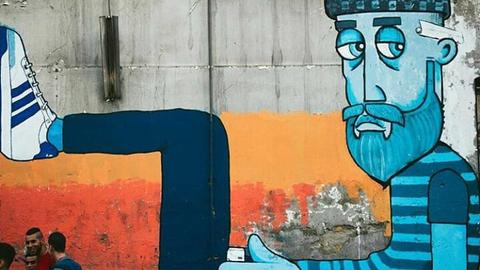 Algeria: 'If we had freedom of expression, we wouldn't write on the walls'