Is jail saving Uzbek ‘princess’ from extradition to the US?

Uzbek authorities oppose Karimova’s extradition to the US because she knows too much about top Uzbek officials, including President Shavkat Mirziyoyev, who served as prime minister in her father’s government, an analyst said.

Gulnara Karimova, the late Uzbek autocrat Islam Karimov’s eldest daughter once known simply as ‘Princess’ and rumoured to become his heiress apparent, has a new residence – a women’s jail outside the Uzbek capital, Tashkent.

Five years after the glamorous socialite, singer, diplomat and business tycoon fell out of her dictatorial dad’s favour and less than three years after his death, the 46-year-old mother of two found herself behind bars – purportedly, because Karimov’s successor didn’t want her extradited to the US, where she is accused of extortion and trying to launder no less than $866 million.

And no one knows how long she will spend in jail.

“For months now, we have asked the Uzbek authorities to explain how they count the remaining days’ imprisonment and what is the starting point of the sentence,” her lawyer Gregoire Mangeat tweeted on April 4. “Still no response received.”

In 2015, an Uzbek court charged her with extortion, theft of state property, tax evasion and ‘assistance to criminal groups’ that had assets in 12 nations worth over $1.7 billion – and handed down an appallingly lenient sentence of five years of house arrest.

In 2017, another court sentenced her to 10 years in jail for fraud and money laundering, but last year, the sentence was replaced with five years of house arrest. However, in early March she was abruptly transferred to prison for what prosecutors called ‘systematic’ violations of her detention conditions.

Karimova’s daughter Iman claimed police stormed into their apartment in Tashkent and dragged her mother out.

“First, they threatened my mom on behalf of [Uzbekistan’s] 'leadership’,” she wrote on Instagram on March 3. “Then they took my mom out of the bath and took her to an undisclosed direction.”

Karimova’s relocation, however, may have been prompted by an announcement the US authorities made just days later.

The Justice Department said on March 7 that Karimova was involved in one of the largest bribery schemes ever under the US Foreign Corrupt Practices Act. It charged her with the solicitation of some $866 million in bribes from three international telecoms companies.

Uzbek authorities oppose Karimova’s extradition to the US because she knows too much about top Uzbek officials, including President Shavkat Mirziyoyev, who served as prime minister in her father’s government, a Central Asia analyst claimed.

“That's why they hid her out of harm’s way,” Alisher Ilkhamov, an Uzbekistan-born research associate at the SOAS University of London, told TRT World.

Uzbek prosecutors and Foreign Ministry officials were not available for comment.

In post-Soviet Uzbekistan, Karimova was a Renaissance woman: she dabbled in poetry and sang, served as Uzbekistan’s ambassador to Spain, ran a media holding, a charity and a youth movement, designed jewellery and clothes and even earned a black belt in karate.

She could not be further from the average Uzbeks at the time, suppressed by purges, economic hardships, corruption and seasonal slavery.

Thousands of opposition activists, dissidents and alleged Islamists have languished in jails, millions of labour migrants toiled in Russia and Kazakhstan, and at least another million were herded to the countryside every fall to pick cotton for little or no payment.

But the ‘Princess’ was busy mingling with Western celebrities, recording songs and making music videos. She decorated her Swiss chalet with art stolen from Uzbek museums, trafficked Uzbek women to Gulf monarchies to work as prostitutes, and took over profitable businesses throughout Uzbekistan, according to human rights groups, observers and victims of her business acumen.

A leaked US diplomatic cable described her as a ‘robber baron’ and ‘the most hated person’ in Uzbekistan.

With her diplomatic immunity, she did not have to fear an investigation Sweden opened in 2012 into international telecommunication companies that bribed her to gain access to Central Asia’s largest and fastest-growing market.

She described how her mother and younger sister Lola used black magic to sow discord between Gulnara and her father. She claimed that top Uzbek officials and mafia bosses sold lucrative government jobs, and accused Rustam Inoyatov, a dreaded intelligence chief, of plotting to overthrow her father.

In the eyes of Karimov, a ruthless ex-Communist used to secrecy, tweeting from the halls of Uzbekistan’s power seemed tantamount to treason, and no blood ties could justify what his daughter had done.

It wasn’t the first time Karimov purged a family member. His nephew Jamsheed Karimov, a reporter who wrote about corruption and human rights violations, was beaten up, abducted and placed in a psychiatric institution in 2006.

Gulnara Karimov got away with a beating from her father, house arrest, isolation from the internet and the dismantling of her business empire. In 2014, her Twitter account was removed, businesses closed down, and dozens of former business associates and employees, including her cousin, were arrested and given lengthy jail sentences.

“There was absolute panic, everyone who was connected to her was scared to death,” her former employee, who fled Uzbekistan, told TRT World on condition of anonymity.

Meanwhile, the Swedish investigation led to probes in Switzerland and the US, and focused on three telecoms companies – TeliaSonera, VimpelCom and MTS, whose shares trade on US stock exchanges.

Confined to one of her houses in Tashkent, Karimova was not seen in public even at her father’s funeral in 2016.

Her father’s prime minister and successor Shavkat Mirziyoyev started an Uzbek ‘perestroika’ which boosted the economy and started a moderate political thaw, but Gulnara Karimova’s disappearance from public view prompted reports about her death by poisoning.

But she was alive – although conditions at the Zangiota penitentiary are nearly lethal, with prison officials likely to abuse her and extort money from her, according to a human rights advocate who spent almost two years there.

“These corrupt officials pressure convicts from rich families,” Mutabar Tojiboyeva, who was arrested in 2005 and sentenced to eight years in jail for bribery during a government-orchestrated trial, told TRT World. 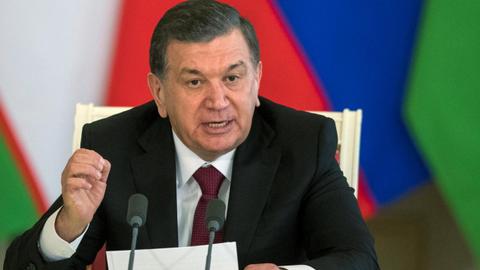 Uzbekistan offers to host talks between Afghan government and Taliban