Can the Italian government turn around the country’s faltering economy by relying on a controversial consultancy firm?

"We have to call the best people in the State, maybe the young, not delegate key tasks to private-sector outsiders," the ex-government left-leaning minister, Giuseppe Provenzano, claimed on Twitter.

Mario Draghi, the new Italian Prime Minister, former European Central Bank (ECB) chief and Goldman Sachs banker, has alarmed critics in the country for eagerly signing a contract with McKinsey. They see it as a sign that Draghi will continue implementing neo-liberal policies in the country.

News outlets have fawned over Draghi's plans to "save Italy" and have even dubbed him "Super Mario."

One economics professor warned that the Italian taxpayer would pick the tab for giving McKinsey access to "private and sensitive information", which would allow the company to help contractors bid in a procurement process it had designed.

The Italian professor warned that the country's bureaucrats will be undermined, their skills and abilities "debased" if Draghi's appointment of McKinsey went ahead.

"A private company cannot be allowed to make the decisions for the country's future," added the economist.

McKinsey will have the sensitive task of writing Italy's economic plan, which will have to be submitted to the European Commision by the end of April. The consultancy firm is notorious for its role in fuelling America's opioid crisis and bungling France's Covid-19 vaccine rollout.

The worry for many is that McKinsey will advance political positions that could enrich the company and clients that stand to benefit from the Italian government bungling copious amounts of money their way.

Greece's former Minister of Finance, Yanis Varoufakis, called Draghi's decision to call in McKinsey as "sad", going on to lament "What next? Get the Mafia to re-organise the Ministry of Justice?"

Another critic called the Italian government's decision to outsource the country's economic plan a "new low" that "undermines democracy."

The worry will be that the populist right-wing party, the Northern League led by Matteo Salvini, could take advantage of what many believe will be seen by voters as another elite fix that leaves ordinary Italians behind.

Salvini's party is currently leading in the polls with more than 24 percent of the vote, and until recently, the party was in a coalition government.

Italy has been the epicentre of the Covid-19 pandemic in Europe and was one of the first countries to institute a nationwide lockdown. The economic fallout in the country has been devastating.

The country saw tourist numbers decline by 99 percent and the worst economic contraction since World War II. Even before the onset of the current pandemic, the country was reeling from the 2008 financial crises and a wider economic malaise.

Italy's economy today is about the same size as it was in 2004, and some fear that the pandemic will only make the country's long term prospects even worse.

Now the fear is that under the guise of Draghi's technocratic government decisions, McKinsey's economic proposals may only deepen the country's woes and spur the growth of right-wing political parties.

There are already signs that right-wing nationalist parties are not wasting a moment attacking Draghi's choice and sharpening a narrative that could take hold if McKinsey's past history is anything to go by.

Opposition leader Giorgia Meloni from the far-right and nationalist Brothers of Italy party asked pointedly on Twitter: "Is it possible that with all the ministers, deputy ministers, undersecretaries, heads of department, heads of legal offices, task forces, managers, technocrats and State employees that we have, the Draghi Government needs to entrust the drafting of the Recovery Plan to a private consultancy firm?" 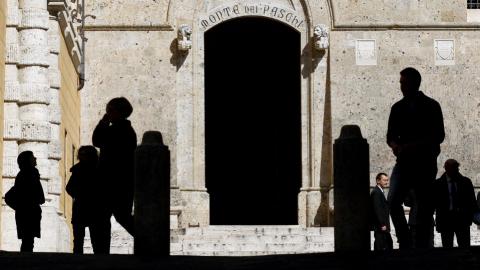 The world's oldest bank is in trouble amid Italy's political crisis