UN official calls for end to ‘illegal’ blockade against Qatar

A new report urges the Saudi-led blockade to be lifted immediately and condemned punitive measures as a violation of human rights.

A United Nations expert has called on Saudi Arabia, the United Arab Emirates (UAE), Bahrain and Egypt to lift their blockade on Qatar after concluding the punitive sanctions taken by the quartet were illegal.

In a preliminary report published on Thursday following a two-week visit to Qatar, Alena Douhan, UN special rapporteur on the negative impact of sanctions on human rights, said the “unilateral measures” levied against Doha have had a disproportionate impact on fundamental rights and freedoms and “affect negatively the rights of people living in Qatar and other individuals beyond Qatar’s borders.”

“Measures directly affecting fundamental human rights shall not be used as the means of influencing the government,” she said.

UN expert @AlenaDouhan urges Saudi Arabia, the United Arab Emirates, Bahrain and Egypt to drop sanctions imposed in 2017 against #Qatar. She says the sanctions harmed the ability of Qataris to enjoy a number of fundamental rights and freedoms. Learn more: https://t.co/md0hQESlzb pic.twitter.com/P2XBDhtuiT

Douhan underlined that any unilateral sanctions imposed are illegal unless authorised by the UN Security Council or if taken as countermeasures in accordance with stringent legal criteria and in full compliance with international law.

Under the UN Charter, the imposition of unilateral coercive measures against member states is prohibited if not authorised by relevant organs of the organisation or if they are inconsistent with the principles contained in the charter.

A rift with no end in sight

An air, land and sea blockade was imposed on Qatar in June 2017 by fellow Gulf Cooperation Council (GCC) member states Saudi Arabia, UAE and Bahrain, along with Egypt, over claims that Doha was fostering close ties with regional foe Iran and that it supported “terrorism”.

Qatar has long rejected the charges and maintains there was no justification for cutting diplomatic and trade ties.

Early into the blockade, the four nations issued a list of “Thirteen Demands” and “Six Principles” to be carried out within 10 days as conditions to lift the sanctions, to which Doha refused.

It included downgrading diplomatic relations with Iran, ending military cooperation with Turkey and shuttering broadcaster Al Jazeera – demands that were condemned by a number of UN special rapporteurs and organisations like Human Rights Watch and Amnesty International.

Douhan found the request to close Qatari media outlets in particular to be “unacceptable and contrary to international human rights law” and said it creates a “chilling effect that stifles civil society as well as provokes uncertainty and fear among writers and journalists”.

Douhan also expressed “serious concern” over the treatment of Qataris expelled by the boycotting countries at the start of the crisis, which interrupted work and study, and separated mixed-nationality families.

In the same breath, the special rapporteur praised Doha for not adopting retaliatory measures, commending steps taken by the government to “mitigate the negative consequences of the sanctions applied on the people living in Qatar” and said she “received credible information that Qatar’s government has sought to alleviate the potential harm to many nationals of the Four States who wish to remain in Qatar”.

Signs of a possible resolution have surfaced in the years since the blockade began but no substantial progress has been made towards resolving the standoff.

Like all UN special rapporteurs, Douhan’s work is deemed independent and does not speak directly for the body. Her findings however can be used to inform the work of UN organisations.

Douhan will present the final report to the UN Human Rights Council in September 2021. 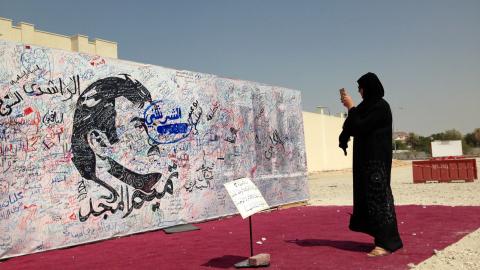