1
What drives France’s sinister obsession with shutting down mosques?
2
Greece’s military buildup in the Aegean – a blow to international law
3
A win for sport diplomacy as 4th World Nomad Games conclude in Türkiye
4
Russia’s annexation plan for Ukraine, explained
5
As funding dries up, China amends its ambitious Belt and Road project

America’s departure from another arms-control treaty deals a heavy blow to its allies, and turns back the clock on multiple cold war achievements.

In a major setback to global arms control, the Trump administration has announced it will no longer be a part of the Open Skies Treaty (OST), a 34-year-old convention that allows its members to make unarmed reconnaissance flights over the territory of other signatories to the deal. While the Trump administration has signalled its intent to exit the accord for some time, the move is coming under fire, Democratic lawmakers argue it will distance the US from European allies, which plays into Russia's hands.

What is the Open Skies Treaty?

The treaty was first proposed in 1955 by former US President Dwight Eisenhower to de-escalate Cold War tensions. At the time, Soviet Union Supreme Premier Nikita Khrushchev laughed off the idea as an “espionage plot”. But when the Berlin Wall fell and the Soviet Union dissolved, the idea was revived and pushed forward.

This eventually took the form of a treaty between NATO members and former Warsaw Pact nations that went into effect in 2002 with 35 signatories.

At its heart, the treaty seeks to build confidence among its members through shared openness, lowering chances of accidental war. Through the treaty, a state can “spy” on any part of another signatory with their consent. To do this, the surveilling state has to give notice 72 hours prior to its aerial imaging mission, and must also share the exact flight path it will take 24 hours prior.

Most importantly, any information gathered, such as troop movements, military exercises and missile deployments must be shared with all states who are party to the treaty. The treaty does set criteria however. Only approved imaging equipment is permitted on surveillance flights, and representative officials from the surveilled state also have the right to stay on board during its flight.

While initially imagined as a key part of multiple arms control deals, for over a decade many in Washington believe Russia is in regular non-compliance with OST protocols. Specifically, they’ve blamed Moscow for preventing surveillance flights from happening over Russia, while misusing access provided by the treaty to gather key tactical data.

For President Trump, the last straw came after a Russian reconnaissance plane flew over his golf course in New Jersey, New York in 2017. Three years later, his administration has finally decided to withdraw from the treaty, with Secretary of State Mike Pompeo accusing the Kremlin of “flagrantly and continuously violating the Treaty in various ways for years.”

Russia has denied the allegations, and has called Washington’s exit as “very regrettable”.

The OST was realized in 1992, well before the technological leap in satellite imaging technology followed, and quickly became the bread and butter of intelligence gathering. But in spite of the best satellite’s ability to capture detailed images down to 40 centimeters, surveillance aircraft are still necessary. Critically, they provide crucial data through thermal imaging that satellites can’t. Since 2002, the US has flown 201 surveillance missions over Russia and Belarus.

Moreover, given the US is the only NATO country with a significant number of military satellites, other NATO countries would have to rely on the US to provide classified intelligence. This would be far more difficult than acquiring OST surveillance records, and defeat the purpose of reducing military tension or preventing arms build-ups by countries on Russia’s doorstep.

What does the US exit mean for the treaty?

Far from final, Pompeo left a caveat in his press conference, stating that the US would rethink its decision to withdraw if Russia “demonstrates a return to full compliance”. The approach is nearly identical to the Trump administration’s suspension of the Intermediate Range Nuclear Forces (INF) treaty in 2019, which also played a key role in ending the arms race that defined the Cold War.

During the United State’s withdrawal from the INF, the Trump administration also said it would reconsider engaging with Russia if Putin sought a new treaty.

If the US exits the treaty, it could effectively provide Russia with a pretext to leave as well, coupled with a lack of incentive to abide by it. This could significantly impact NATO capabilities in the region, which largely rely on the OST’s surveillance data to monitor Russian military movement and missile placement in the Baltics.

More dangerously, the United State’s exit from the treaty undermines its ability to negotiate with other nuclear powers such as North Korea or Iran; if only because it gives the appearance that Washington is inclined to walking out on the treaties it makes. 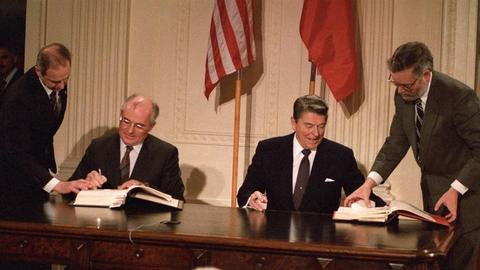 Understanding US-Russia spat over deployment of missiles in Europe

1
What drives France’s sinister obsession with shutting down mosques?
2
Greece’s military buildup in the Aegean – a blow to international law
3
A win for sport diplomacy as 4th World Nomad Games conclude in Türkiye
4
Russia’s annexation plan for Ukraine, explained
5
As funding dries up, China amends its ambitious Belt and Road project