Tens of thousands of Palestinians are expected to attend large-scale protests along the Israeli border and in Jerusalem as the United States and Israel will launch formal opening on Monday, a move that draws criticism internationally.

Tens of thousands of Palestinians are expected to rally along the Israeli border and in Jerusalem as the United States is to officially move its embassy from Tel Aviv to that city on Monday.

Israel on Sunday kicked off festivities to celebrate the opening of the new US embassy, even as it bolstered its forces along the Gaza border and in the West Bank in anticipation of mass Palestinian protests of the move.

A day before the embassy's formal opening, Israel hosted a gala party at its Foreign Ministry with US President Donald Trump's daughter Ivanka, her husband, Jared Kushner, and other American VIPs.

"It's the right thing to do," a smiling Netanyahu told the jubilant crowd.

Trump announced his decision on Jerusalem in December, triggering a joyous reaction from Netanyahu's nationalist government.

The move infuriated the Palestinians, who claim Israeli-annexed east Jerusalem as their capital.

Palestinian President Mahmoud Abbas halted ties with the Trump administration and declared it unfit to remain in its role as the sole mediator in peace talks.

The rival Hamas movement, which controls the Gaza Strip, has been staging a series of weekly demonstrations against a crippling Israeli-Egyptian blockade of the territory.

Those protests are to climax on Monday, with tens of thousands of people expected to gather along the Israeli border in an event timed to coincide with the embassy opening.

Hamas has signalled that large crowds, numbering perhaps in the thousands, might try to break through the border fence to realise the "right of return" to lost homes.

Both the embassy move and the protests have symbolic timing.

Trump has said the opening is meant to coincide with the 70th anniversary of Israel's establishment.

Forty-five Palestinians have been killed and over 1,800 have been wounded by Israeli fire since the weekly protests began on March 30.

Israel says it is protecting a sovereign border and accuses Hamas of using the unrest to plan and carry out attacks.

The Israeli military announced that it bolstered forces on the Gaza border with combat battalions, special units, intelligence forces and snipers.

The Palestinian protests also mark the date as the anniversary of their "Nakba," or catastrophe, when hundreds of thousands of people fled or were forced from their homes during the war surrounding the event.

About two-thirds of Gaza's two million people are descendants of Palestinian refugees.

A high-ranking delegation of Gaza's Hamas movement headed on Sunday to Egypt, amid diplomatic efforts aimed at containing the mass rally.

But one of the Hamas participants, Khalil al Hayya, said there were no breakthroughs and the march would go on as planned on Monday.

The army said it was also reinforcing its troops in the West Bank with several combat battalions and intelligence units in case of possible unrest there as well.

Most countries say Jerusalem's status should be determined in a final peace settlement, and say moving embassies would prejudge any such deal.

"US decision to move its embassy to Jerusalem punishes Palestine, which continues to seek peace," said Turkish President Recep Tayyip Erdogan on Sunday during his visit to the United Kingdom.

He said only a few countries had to vote with the US as they were told to do so in various phone calls in return of financial aids given to those countries.

“Jerusalem, above all, east Jerusalem is the capital of Palestine. As the Islamic world, we accept it as it is,” Erdogan said.

Sunday's celebrations coincided with Israel's "Jerusalem Day," the 51st anniversary of what it refers to the city's "unification" during the 1967 Mideast war.

Israel immediately annexed east Jerusalem - home to the city's most sensitive Jewish, Muslim and Christian holy sites - in a move that has not received international recognition.

The Palestinians claim east Jerusalem as the capital of a future state.

Earlier Sunday, Netanyahu told his cabinet that there would be a "series of decisions" to build up Jerusalem, including its contested eastern sector.

Shortly after, the government approved construction of a $57 million cable car system that will link west Jerusalem to the Old City.

Although Trump has said his declaration does not set the final borders of the city, his recognition of Jerusalem as Israel's capital has been perceived by both Israel and the Palestinians as taking Israel's side in the most sensitive issue in their conflict.

Only two countries, Guatemala and Paraguay, have said they will follow suit.

Most of the world maintains embassies in Tel Aviv, saying the Jerusalem issue must first be resolved.

Netanyahu, who frequently clashed with President Barack Obama, has found a welcome partner in Trump.

The new administration has lined up solidly behind Netanyahu in his dealings with the Palestinians and delighted him last week when it withdrew from the international nuclear deal with Iran, Obama's top foreign policy achievement.

Addressing the crowd on Sunday evening, Netanyahu said Israelis would be "eternally grateful" for Trump's decision on Jerusalem.

"Thank you, President Trump, for your bold decision. Thank you for making the alliance between Israel and the United States stronger than ever," he said.

Netanyahu said Trump's decision recognised a 3,000-year Jewish connection to Jerusalem and the "truth" that Jerusalem will be Israel's capital under any future peace deal.

"It's been the capital of our state for the past 70 years. It will remain our capital for all time," he said.

Kushner and Ivanka Trump sat in the front row near Netanyahu during the ceremony but did not speak.

Netanyahu called their presence a "national and international statement" that "touches our hearts."

"The move could backfire"

"The United States has no greater partner than Israel," he said.

Jeremy Ben Ami, president of J Street, a liberal pro-Israel group in the US, expressed concern that the embassy move would backfire.

He accused the White House of putting the interests of a small group of hard-liners ahead of the larger interest of promoting peace with the Palestinians.

"Making a move like this removes the US as a credible mediator," he said.

As TRT World's Jon Brain reports even many American Jews also fear the move could sabotage any prospect of peace in the region.

The Palestinian ambassador to Washington sharply condemned the relocation of the US embassy in a statement on Sunday.

"Tragically, the US administration has chosen to side with Israel's exclusivist claims over a city that has for centuries been sacred to all faiths," said Husam Zomlot. 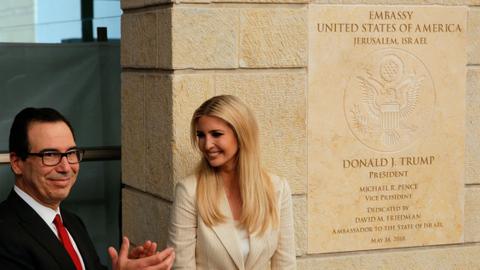 US officially opens embassy in Jerusalem