Suicide bombing wounds 2 outside US consulate in Jeddah

A suicide bomber detonated himself outside the US consulate in the Saudi city of Jeddah early on Monday, wounding two police officers.

A suicide bomber was killed and two other people wounded in a blast near the US consulate in Saudi Arabia's second city of Jeddah early on Monday, state TV said, the first bombing in years to attempt to target foreigners in the kingdom.

The attacker parked his car outside a hospital opposite the consulate at about 2.15am and detonated his device after being approached by two security men, killing him and lightly wounding them, it said, quoting a security spokesman.

Three further blasts rocked the location of the bombing hours later, a witness told Reuters, as police carried out what appeared to be controlled explosions near the site.

A video sent by the witness showed police taking cover behind vehicles and covering their ears before an explosion sounded.

Reuters could not immediately reach officials to give more details. A photograph on the Sabq news website showed what appeared to be the remains of a man lying next to a taxi.

The statement on state television referred to the location of the consulate by its street address and did not refer directly to the presence of the diplomatic mission there, an apparent effort to downplay the attack's likely target.

A spokesman for the US State Department said it was aware of reports of a blast in Jeddah and was seeking more information from the Saudi government. He added that all staff at the consulate were accounted for.

A State Department message sent to US citizens in Saudi Arabia noted the reports of the attack and reiterated earlier advice to remain aware of their surroundings and take extra precautions when travelling in the country.

The witness said the area had been closed off by the security forces and that helicopters were flying overhead. He said the explosion appeared to have taken place about 20 metres (65 feet) from an outer checkpoint of the consulate. Concrete barriers protect the street outside the consulate.

Islamic State has carried out a series of bombing and shooting attacks in Saudi Arabia since mid-2014 that have killed scores of people, mostly members of the Shi'ite Muslim minority and security services.

A decade ago, an al Qaeda campaign focused on Western expatriates in the world's top oil exporter, killing hundreds in attacks on businesses and residential compounds. One 2004 attack hit the US consulate in Jeddah, killing nine. 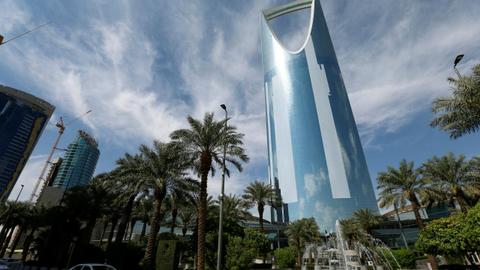