Unpaid workers are left in the lurch as multinationals leave Yemen

The energy firm Total and security company G4S left the country in 2015 as conflict between the Houthis and the government escalated, leaving over 200 local employees in the lurch.

Over 200 Yemeni security guards have been caught between the French energy giant Total, one of the world's largest security firms, G4S — and a fake entity operating under the name ‘G4S Yemen' under the patronage of powerful locals.

The 208 guards say they have not been paid for a year and continue on in their roles — but not one of the companies has taken responsibility. Three men were also killed in the fall-out after G4S left, the circumstances of these deaths are still under investigation.

But in 2015, the conflict between the Houthi rebel force and forces loyal to Yemen's President-in-exile Abdrabbah Mansoor Hadi peaked. Total discontinued most of its operations in the country but still has a presence there, according to its website.

But the guards who were hired by G4S say that they were not aware their employer had left the country. A local Yemen security outfit involved in the original firm decided to carry on operations using G4S' international logo.

"The entity in Yemen is not a G4S company," a G4S spokesperson told TRT World. "It is trading using the name and G4S logo in breach of notices requiring it to cease. Any actions of this company are not actions being taken or supported by the G4S group."

This ‘Yemeni G4S' firm paid the guards from the time the international firm, G4S, left in June 2015 until January 2016. It continued to guard Total assets, according to a translated communique received by TRT World, below, dated March 21, 2016. The document from a ‘Yemeni G4S' attorney accuses Total of not paying its dues and says it will no longer be able to pay the guards.

The guards continue to protect Total sites to this day. They say they still work in Sector 10, in the Masilah oil basin, where Total was previously running operations, adjacent to Sectors 70 and 72, which it still operates.

An oil company contractor familiar with Yemen's energy sector told TRT World that Total's expatriate workforce withdrew from Yemen, but they still have staff. And assets. "They have more assets in Yemen than any other company — pipeline, gasification plants, a nice big office in Sana'a with nice big cars and they all require a level of protection," said the contractor. "The Houthis will literally walk into any oil company's building and take what they want."

Sami had been working for G4S since 2009, he told TRT World over the telephone. "The real G4S left. We recently figured out, the office which remains on street 50 is run by a fake G4S," said the security guard. He said the guards are owed $27,000 for one year in addition to overtime.

When asked if they were going to pay the employees or take the legal action against ‘Yemeni G4S', the G4S spokesperson was unable to comment.

A case was submitted by the guards against Total and G4S in the local labour arbitration committee. The committee, empowered by Yemeni labour law, issued a verdict on December 15, 2015, to seize the property and money of Total till the time the guards are paid.

Can the Yemeni court hold Total or G4S responsible for these guards? Both companies cited "force majeure," a term used when extraordinary circumstances are cited to exempt contracting parties from fulfilling obligations.

Yes, according to Sami. "Yemeni law says if the contracting company (ie G4S) leaves and you continue to work for more than six months, you become an official employee of the principal company (ie Total)."

Total is still responsible as the principal employer under Yemeni labour law, Saleh Jolaidan, a member of Yemen's Shura Council or parliament who is helping at least 100 guards fight for their rights, told TRT World. Jolaidan approached Cedric Gerome who is part of the Committee for a Workers' International and helped surface the problem by reaching out to other activists and the media.

The ministry of oil and minerals was issued a letter by the arbitration committee on December 16, 2015 — a copy of which is with TRT World — to make sure the verdict would be executed. This temporary measure did not last long, and the guards were still not paid.

"The court took the sites of Total and put us there as guards. We cannot leave as it is our responsibility," said Sami.

Things had long escalated on the ground, said Jolaidan.

On December 3, 2015, "there was a fight between the local representatives of Total and the guards. Three guards were killed." Jolaidan said the companies who were contracting local gangs shot the three men. He did not identify the name of the group.

"They killed Mohammad Alzubide first. When Ali AlSanhani tried to help Mohammad, they shot him too. Then they killed Abdulrahman Kieran," he said.

"I am a living martyr because I was with my colleagues when they were killed in front of me," Sami told TRT World.

The involvement of local heavyweights came as no surprise to the oil company contractor TRT World spoke to on condition of anonymity. He alleged that often the very people involved in controlling security contracts in Yemen will employ local gangs to blow up a pipeline in order to prompt the oil company to hire more security.

The investigation into the death of the three guards is still under way, correspondence between the criminal prosecution office and the investigation director of Sana'a's security shows.

Later, in February 25, 2016, the guards on court-mandated duty at Total property under Mohammad Ajinah — a local representing the company according to Jolaidan — were forcibly removed by his brother, Abu al Ezz. Al Ezz has been accused of using Houthi forces — supporters of former president Ali Abdullah Saleh — in the police report.

The complainant, a guard named Ahmed Tahlah, said Ajinah justified the use of force saying the property did not belong to Total and so the security personnel had no right to be there.

Tahlah said this was the second time Ajinah tried to remove them using violence. The first time, he said in the police report, they were abducted even though they were on court-mandated duty.

There are also other local powerbrokers in play after Total and G4S left the country.

According to the oil company contractor and Jolaidan, there is at least one well-known, influential local power broker behind the presence of, initially, G4S and now the ‘Yemeni G4S' — Faris al-Sanabani.

"Faris and Husam al-Sanabani should be held responsible as they are behind the fake G4S," said Sami.

Faris was the press secretary to former president Saleh and is behind several media platforms, including the English-language Yemen Observer. His former personal assistant accused Faris of actively helping the Saleh regime to hide money through various media holdings.

Faris is "the political patron" behind G4S who is part of an "inside group run by Saleh's elder son Ahmad Ali," the oil company contractor told TRT World.

He added, "He was the money behind G4S. He has a lot of money and has the political connections and enabled G4S to get contracts." One of the biggest oil contracts which this group of rich and powerful elite in their early 40s won was Total, said the contractor.

Jolaidan describes Faris as the president of the current, fake ‘Yemeni G4S'. TRT World was unable to make contact with Faris.

But to the guards, to Sami, the names no longer matter. "The British G4S and French Total [...] are benefiting from the current conditions of the war," he said. "My colleagues have been killed by those who represent ‘Yemeni G4S' and Total in Yemen, as well as the British G4S. All of them have a hand in committing these humanitarian crimes."

With additional reporting by Zaher Alghazzwai 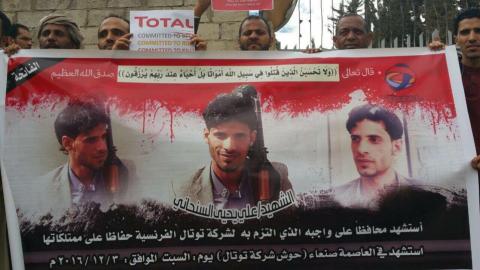 Why are people protesting against the energy giant Total?