The Pentagon says the planned posts in northern Syria are meant to ease Turkey's border concerns, but it also describes Ankara's recent military operations in the region as "instability".

Pentagon Chief James Mattis recently announced that the US will set up observatory posts in northern Syria close to the Turkish border to ease Ankara’s concerns.

The rationale behind setting up the posts in the area, Mattis said, was to warn Turkey about any threats coming from the Syrian regime. But for Turkey, it is not Syrian regime leader Bashar al Assad's military but the YPG that poses a primary security threat.

In much of northern Syria, different armed groups from the Turkey-backed FSA to the US-backed YPG are still fighting each other for regional dominance. Since Assad's military has a very low presence in the region, Turkey considers YPG's aggressive posturing in the area a military threat.

Supported by the US since 2014, the YPG is the Syrian wing of the PKK, an armed group which is recognised as a terrorist organisation both by Ankara and Washington.

YPG recruits most of its militants from the Kurdish population in northern Syria, which neighbours Turkey’s predominantly Kurdish-populated southeastern region.

Turkey has provided the US with evidence on several occasions to prove a strong link between the YPG and the PKK, but Washington has denied any links between the two. The US justifies its support to the YPG saying the armed group has been instrumental in its fight against Daesh in northern Syria.

Mattis’ latest announcement on the observatory posts is laced with layers of ambiguities, which have failed to address Turkey's concerns or signal any major policy shift concerning Washington’s position on the YPG.

“We do not say the YPG is the same as PKK,” Mattis said, repeating the US stance regarding the YPG-PKK relationship.

“And the Syrian Democratic Forces [which is mainly led by the YPG], who have lost thousands of troops killed and wounded fighting ISIS [Daesh], got distracted by the instability up around Afrin and Manbij [in northern Syria], so they were not staying fully focused,” Mattis said, portraying the group in a positive light.

Without naming Turkey, Mattis described Turkey's military operations in Manbij and Afrin as "instability," which ended up "distracting" the YPG cadres in their fight against Daesh. The choice of words gave an impression that the Pentagon chief favored the YPG over Turkey.

The US has about 2,000 soldiers deployed in northern Syria, a presence that became a cause for concern for many Syria observers during Turkish military operations. Many wondered whether the US troops stationed in close proximity to the YPG locations were heading for a collision with Turkish forces.

Turkey recently shelled YPG positions along its southeastern border after leading a successful operation against the group in Afrin earlier this year.

The YPG has long claimed that Turkey’s operations have prevented it from focussing on anti-Daesh operations.

Soon after the Assad regime withdrew from northern Syria, the YPG moved in, creating “cantons” or autonomous districts, in the region in 2012. Turkey’s Operation Olive Branch in January this year pushed out the YPG cadres from the Afrin canton in northwestern Syria. Much to Ankara's surprise, the US voiced concerns about the scope of the operation.

Manbij is another hot spot between Turkey and the YPG because it’s located west of the Euphrates River. Turkey has declared any YPG extension from east to west of Euphrates as a red line because it could allow the group to create a long corridor next to Turkey’s border and find a way to reach the strategically sensitive Mediterranean Sea.

The YPG, however, continued with its advance, taking over Manbij in 2016, while the US continued to support the armed group, despite Turkey's protests.

In the recent past, however, Turkey saw a thawing of frosty bilateral ties with Washington, when the two countries agreed on holding joint patrols in Manbij region.

“If the Manbij model is successful, the cooperation in the rest of northern Syria will reflect the Manbij model,” said Matthew Bryza, a former US diplomat and a non-resident fellow of the Atlantic Council.

Though Mattis said that the US will "track any threat" coming toward Turkey and inform the Turkish military about it, Ankara expects Washington to have a clear stance on the YPG question and desist from playing both ways.

Referring to the observatory posts, Mattis said: “This is closely collaborated — we are consulting closely with Turkey, military and State Department. Both were consulting with them.” 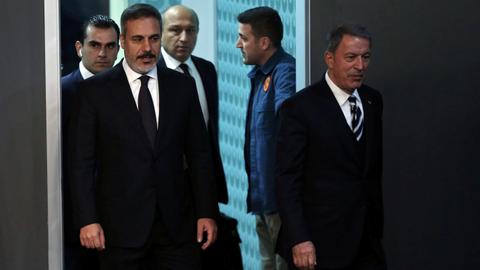