Iran has said that its arch-foe the United States is facing "maximum isolation" after major powers dismissed a unilateral US declaration that UN sanctions on Tehran were back in force.

"We can say that America's 'maximum pressure' against Iran, in its political and legal aspect, has turned into America's maximum isolation," he said in a televised cabinet meeting.

He also praised the UN Security Council's approach to the issue as "very valuable" as it ignored "America's request (and) held no session to consider their request."

The Security Council was what "the Americans always thought of as their point of strength," he said.

"America is approaching a certain defeat in its sanctions move ... It faced defeat and negative response from the international community," Rouhani said.

"We will never yield to US pressure and Iran will give a crushing response to America's bullying," he said.

The Trump administration had said the so-called "snapback" of the sanctions was in effect and threatened to "impose consequences" on any UN member state that fails to comply.

"The whole world is saying nothing has changed."

The sanctions in question were lifted in 2015 when Iran and six world powers – Britain, China, France, Germany, Russia and the US – reached a landmark nuclear deal known as the Joint Comprehensive Plan of Action.

But US President Donald Trump withdrew from the JCPOA in 2018, saying the deal – negotiated by his predecessor Barack Obama – was insufficient. He also renewed and even strengthened Washington's own sanctions.

The US insists it is still a participant in the agreement that it stormed out of, but only so it can activate the snapback option, which it announced on August 20.

Soon, we will announce a range of additional measures to strengthen enforcement of @UN sanctions on Iran. Our maximum pressure campaign on the Iranian regime will continue until it stops spreading chaos, violence, and bloodshed.

The Iranian rial fell to a record low against the US dollar on Sunday following the Trump administration's declaration.

The US currency was offered for as much as 273,000 rials, up from 267,800 rials on Saturday, according to foreign exchange site Bonbast.com, which tracks the unofficial market.

Iran has dismissed the US sanctions move as "void and illegal" and UN Secretary-General Antonio Guterres told the Security Council on Saturday he cannot take any action on the US declaration because "there would appear to be uncertainty" on the issue.

Virtually every other Security Council member disputes Washington's ability to execute this legal pirouette, and the UN body has not taken the measure any further.

On Sunday, two permanent council members – France and Britain – issued a joint statement along with non-permanent member Germany saying the US's "purported notification" was "incapable of having any legal effect".

"The illegitimate initiatives and actions of the United States by definition cannot have international legal consequences for other countries," said its foreign ministry.

Top US diplomat Mike Pompeo had promised in his announcement that measures would be announced in the coming days against "violators" of the sanctions.

"If UN member states fail to fulfill their obligations to implement these sanctions, the United States is prepared to use our domestic authorities to impose consequences for those failures and ensure that Iran does not reap the benefits of UN-prohibited activity," he stated.

With 45 days to go until the November 3 election, Trump could unveil those measures in his speech at the UN General Assembly on Tuesday.

In mid-August, the United States suffered a resounding defeat at the UN Security Council when it tried to extend the embargo on conventional weapons being sent to Tehran, which was due to expire in October.

We will not hesitate to enforce our sanctions, and we expect all @UN Member States to fully comply with their obligations under these re-imposed restrictions.

Pompeo made an unusually vehement attack on France, Britain and Germany, accusing them of "siding with Iran's ayatollahs," and on August 20 announced the snapback.

Washington is hammering home that the arms embargo has been extended "indefinitely" and that many activities related to Tehran's nuclear and ballistic missile programs are now subject to international sanctions.

Iran brushed off the move and called on the rest of the world to unite against what it called the US's "reckless actions".

"This is all much ado about nothing, and I imagine these are the most bitter days and hours for" the United States, said Khatibzadeh.

"Tehran's message for Washington is clear. Return to the international community, to your commitments, stop rebelling and the world will accept you."

"He's now probably waiting for the movie to come out so he can begin to understand it," he told state television.

Some observers said the US announcement was counterproductive.

"I don't see anything happening," said one UN diplomat. "It would be just a statement. It's like pulling a trigger and no bullet coming out." 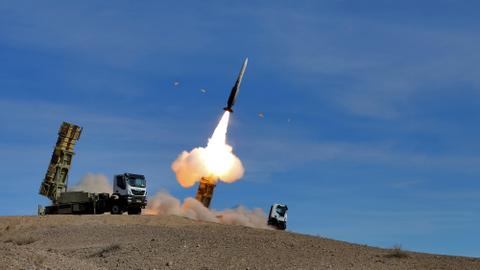