US to continue reducing troops in Iraq

Washington and Baghdad held their first strategic dialogue months after the US killing of the top Iranian military commander Qasem Soleimani in Baghdad fuelled bilateral tensions.

The United States promised on Thursday to reduce troops from Iraq over the coming months after talks with Baghdad, where lawmakers have pushed for their withdrawal.

"The two countries recognised that in light of significant progress towards eliminating the ISIS [Daesh] threat, over the coming months the US would continue reducing forces from Iraq," a joint statement said, without giving figures.

"The United States reiterated that it does not seek nor request permanent bases or a permanent military presence in Iraq," it said.

Iraq, in turn, promised to protect bases housing US troops after a series of rocket attacks blamed on pro-Iranian paramilitary groups.

The two countries on Thursday held their first strategic dialogue in more than a decade, months after Iraqi lawmakers demanded that US forces withdraw in the wake of a US drone strike in Baghdad which killed top Iranian military commander Qasem Soleimani.

Relations have since stabilised under a new US-friendly Iraqi prime minister, Mustafa Kadhemi, and the dialogue was held virtually due to coronavirus precautions.

“Probably the most important thing for the vast majority of Iraqis is how can the US can assist Iraq in this very difficult period,” said Jiyad. And on the American side, “whether they see value in supporting Iraq apart from security.”

Schenker said the US would support the new government through international financial institutions to help meet the parallel challenges of the pandemic and plummeting revenues from oil sales.

In a sign of support for al Kadhimi’s administration, hours after he was sworn in, the US approved a 120-day sanctions waiver enabling the country to continue importing Iranian gas and electricity to meet its power needs. Iraq's progress in becoming more gas independent is also on the agenda as future waivers depend on Baghdad reducing its reliance on Tehran for energy needs.

Iraqi officials have said plans are being drawn up to capture associated gas currently being flared in oil fields in Iraq's south.

“On the American side as well, I think, particularly with the Trump administration, a lot of this is about Iran, whether they admit it or they don’t admit it," said Renad Mansour, senior research fellow at Chatham House. In particular, he said, the US concern has been whether Iraq can prosper as a country without being drawn into Iranian influence. 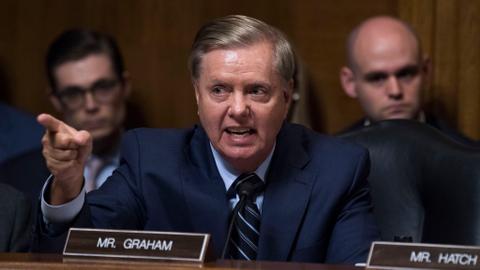