The crowning achievement for the Assad regime will come as it attempts to alter the demographic reality in Syria with frightening consequences for many.

“Westerners tend to confuse stability for tranquility when looking at the Middle East,” Asma Yousef, a Libyan-born civil rights activist told me.

Her point being that those unfamiliar with the inner machinations of states in the Middle East and North Africa regions are inclined to romanticise and hold nostalgic sentiments for disposed Arab-African dictators because of the chaos and conflict that followed the end of their reign.

Specifically, Yousef was referring to the way in which brutal Arab dictatorships use the full weight of their respective national security apparatus to crush dissent, freedom of speech and political opposition. Dictators use fear and control of information to keep those they rule over in a state of perpetual anxiety.

“Those who accuse the opposition to Mr. Assad of being puppets of the West don’t know what it is like to grow up in a police state where you believe that the walls have ears and anything you say might lead you to jail,” writes Loubna Mrie, a Syrian born journalist.

Beyond imprisonment, Assad has demonstrated there’s no act of moral depravity and violence he won’t use in order to hold onto power.

For the past seven years, the Syrian dictator has barrel-bombed civilian neighborhoods, tortured dissidents, gassed women and children, bombed schools and hospitals, killing close to a half-million of his own people, and displacing millions of others.

But the conflict is gradually drawing towards an inevitable conclusion: one in which Assad is left to rule over a completely broken country, the one he’s solely responsible for breaking, with the help of his imperialist and authoritarian benefactors: Russia and Iran.

As the fighting subsides, and as the war inches ever closer to its final end point, that being the moment the rebels have fired their last shot, a sense of stability and normalcy will eventually return to Syria, giving outsiders and observers of the conflict a chance to turn their attention elsewhere.

That is, of course, presuming anyone still cares about the plight of the Syrian people. It’s really hard to tell these days.

In returning to the point made by Yousef, who criticised Westerners for confusing stability for tranquility, the fear and violence Syrians experience will continue long after the war has concluded, and a leaked wanted list compiled by Assad’s security forces gives a glimpse into the future that awaits Syria.

Containing the names of 1.5 million Syrians, which represent approximately 6 percent of the country’s total population, the leaked database points to those wanted by Assad’s security agencies, specifically the General Intelligence Directorate, otherwise known by Syrians as the dreaded Mukhabarat.

“This is serious,” Ruslan Trad, author of Murder of the Revolution, told me.

“Many have no idea they’re wanted by the Syrian authorities. Several of my friends checked their names and only then found out they could be arrested. They wanted to travel to Syria to see their families - if they had not understood the lists, they could now be arrested.”

Trad found his name on the list, and he isn’t even Syrian. He was born in Bulgaria to a Syrian-born father, but believes he was identified as an anti-regime activist through his membership with the Syrian Student Union in Sofia, Bulgaria.

“For me, who lived in Bulgaria, there was no danger, but that was not the case for my family in Syria. My relatives were interrogated many times and asked if they had contact with me,” said Trad.

“The other thing these lists show is what Syria’s possible future looks like,” Trad told me.

“More than one and a half million people are wanted for one reason or another. That means that there will be permanent arrests in the years to come, and many will not be able to return to their country. The more the regime stabilises, the more people are in danger.”

When I asked Aghyan al Zuabi, a Syrian American activist, as to why he believed his name is on Assad’s wanted list, he told me, “My family has a history of opposing the Assad regime years before the revolution. Dad has been exiled for decades and my mother was later banned from entry in early 1990s. I think me and my brother were added in part of our family history, and in part for our recent vocal opposition of regime and its war crimes after the revolution.”

When asked what he thinks will happen to anyone on the list who tries to enter or return to Syria, al Zuabi replied, “The Assad regime has a well documented history of illegal detentions, torture and disappearance of opposition figures prior to the revolution, but it escalated tremendously during the past 7 years and I anticipate the worst is yet to come after Assad is permitted to rule after the killing of hundreds of thousands and the displacement of millions. I think the Assad regime will pursue a policy of vengeance and purging of the population even more so than the before in order to pacify and prevent another uprising against it. Anyone on that list need to treat it as a serious threat on their lives.”

Indeed, Assad’s post-conflict strategy is already taking shape, and its one in which the words “vengeance,” “purging,” and “pacification” play a guiding role.

Assad’s wanted list demonstrates there’s no room in Assad’s Syria for anyone who has voiced even mild criticism of the regime, and it’s almost inconceivable the dictator will permit a single externally displaced Syrian refugee to return.

If you think of the Palestinian Nakba, and the manner in which Israel ethnically cleansed the self-proclaimed Jewish state of its indigenous Palestinian inhabitants, you’re pretty close to imagining how Assad will manage the post-war period.

Similar to the manner in which Israel’s colonial project repopulates the occupied territories with Jewish families, Assad is repopulating Syria with regime-friendly Shia Muslims, Lebanese and Iranian families to help tighten the regime’s control.

“The population swaps are central to a plan to make demographic changes to parts of Syria, realigning the country into zones of influence that backers of Bashar al-Assad, led by Iran, can directly control and use to advance broader interests,” observes The Guardian.

As we witnessed with the fall of Aleppo in 2016, and with Eastern Ghouta currently, when the regime wrests control of territory, it separates the men from their families, and then presents them with one of three options: prison, conscription, or death.

As such these befallen figures will have no say in Syria’s future, and it’ll be foreigners and political allies of the regime who will refill their homes and take their jobs.

After all, Assad started this conflict with the intent of cleansing Syria of his opponents and critics, and there’s no reason to think that effort won’t continue long after the last bullet has been fired. 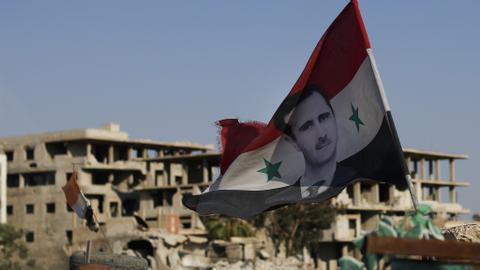