Less than 24 hours after Serena Williams and Adrian Mannarino pulled out of matches after slipping and getting injured, more players have come forward to complain about the unsafe surface.

Despite numerous injuries, Wimbledon organisers remain defiant and are defending the state of their grass courts as concerns mount from players that the surface is too slippery, and dangerous.

Seven-time champion Serena Williams was forced to retire from her first-round match on Tuesday after slipping and injuring her leg in the opening set against Belarussian Aliaksandra Sasnovich on Centre Court.

Men's top seed Novak Djokovic slipped and fell twice in the first set of his first-round match against Jack Draper on Monday, while twice champion Andy Murray said he felt that Centre Court was too slippery with the sliding roof closed.

The opening two days of the Championships have been wet, with play disrupted on uncovered outside courts while the Centre Court and Court One roofs have been well-used.

The All England Club said the courts, which were unused last year after the tournament was cancelled because of the coronavirus pandemic, have been prepared in the usual meticulous way by the groundstaff.

"Each grass court is checked by the Grand Slam Supervisors, Referee's Office and Grounds team ahead of play commencing, and on both days of the Fortnight they have been happy with the conditions and cleared the courts for play," the club said in a statement.

"The weather conditions on the opening two days have been the wettest we have experienced in almost a decade, which has required the roof to be closed on Centre Court and No.1 Court for long periods.

This is at a time when the grass plant is at its most lush and green, which does result in additional moisture on what is a natural surface.

"With each match that is played, the courts will continue to firm up."

We're heartbroken for you, Serena.

Our seven-time singles champion is forced to retire from The Championships 2021 through injury#Wimbledon pic.twitter.com/vpcW1UN78s

'You have to move very carefully'

Even under the roof, the advanced air conditioning system removes moisture from the air to prevent the surface sweating.

Federer said he was asked by the referee whether he felt Centre Court was more slippery than usual.

"I do feel it feels a tad more slippery maybe under the roof," Federer said.

"I don't know if it's just a gut feeling. You do have to move very, very carefully out there. If you push too hard in the wrong moments, you do go down.

"The first two matches are always extremely difficult. But it's always been like this. As the tournament progresses, usually it gets harder and easier to move on."

So slippery this court😅💪🏼.
But what a privilege to see spider-Man in action at @Wimbledon 🥰🍓🌱🙌🏼.
Let’s continue in this way!!
Idemooooo @DjokerNole 💜💜💜 pic.twitter.com/zb0b4UMkyH

Ons Jabeur, the first Arab woman to win a WTA tournament, reached the third round of Wimbledon for the first time on Wednesday after beating five-time champion Venus Williams 7-5, 6-0.

Jabeur, who made history by winning the Birmingham WTA tournament earlier this month, will play Spain's 2017 Wimbledon champion Garbine Muguruza for a place in the Last 16.

"Honestly I was so nervous, the first time I play a legend and not everyone was with me today but it was a great game," said 26-year-old Jabeur.

"My game slices etc goes well with the grass surface. I enjoy it here. I can dive any time I like. Hopefully I can continue my journey."

The ease with which Jabeur romped through the second set against the 41-year-old American was in stark contrast to the tight opening set which lasted 52 minutes.

Jabeur broke Williams in a lengthy first game of the second set, setting up the break point with a lovely cross court forehand and secured the break when Williams sent a forehand wide.

The fight seemed to have gone out of Williams as Jabeur upped her game and broke the American again in her next service game and then again to serve for the match.

Williams did have break points but Jabeur fought back and won the match on her first match point.

Blazing the trail 🇹🇳@Ons_Jabeur defeats five-time champion Venus Williams 7-5, 6-0 to become the first Tunisian woman to reach the third round at #Wimbledon pic.twitter.com/4BhP99UJsC 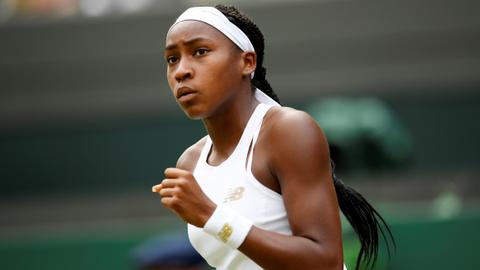 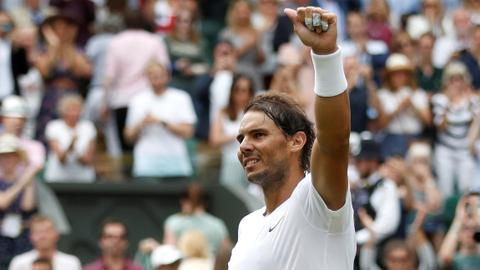