The Trumps' departure has been fractious, with the president refusing for months to accept the election result due to false allegations of fraud and declining to congratulate his successor Joe Biden.

Fear has gripped Washington since the deadly January 6 insurrection at the US Capitol by pro-Trump rioters, prompting extraordinary measures ahead of the inauguration.

Armed protests planned for this past weekend around the country were mostly a bust, but anxiety is still skyrocketing.

Then there is the Covid-19 pandemic simmering in the background, a virus which has infected over 24 million people and killed more than 408,000 in the US alone.

This year's inauguration event where power is expected to be handed over from US President Donald Trump to President-elect Joe Biden will not be the same as the ones before it. Here is a look at how:

Trump will not be attending President-elect Joe Biden's inauguration event, instead pencilling in an 8am send-off event from Joint Base Andrews military airfield in Maryland early on Wednesday morning, hours before the ceremony.

According to The Guardian, Trump wants to host a red carpet event with "a large crowd of supporters, selected backers and current and former officials in his administration and their guests" along with a military parade and an official armed forces farewell.

Trump will then fly on to Palm Beach, Florida to begin his post-presidency at his Mar-a-Lago club, sources told Reuters. He is likely to be in Florida by the time Biden is inaugurated at midday on Wednesday.

The Trumps will not meet the Bidens on the North Portico of the White House before riding to Capitol Hill for the inauguration ceremony, as is usually tradition for an incoming administration.

The incoming president and his wife will instead meet White House chief usher Timothy Harleth.

Biden and Vice President-elect Kamala Harris will take the oath of office in front of the Capitol building with some members of the military present.

The event will be celebrated through a televised virtual event with performers across the US, like for the Democratic National Convention last year, Vox reported.

☕ No tea for Trumps, Bidens

The outgoing president and his wife have also not invited Biden and his wife Jill for the traditional tea visit in the Oval Office.

Reports also say that First Lady Melania Trump has broken with tradition by not inviting Jill Biden over for a White House tour of the private living quarters.

About 25,000 National Guard troops are expected in Washington, DC for Biden's swearing-in after outgoing Trump's supporters stormed the US Capitol on January 6, overrunning police and temporarily halting the congressional count of Electoral College votes.

The DC Metropolitan Police Department is expected to mobilise its entire force of more than 3,800 officers, as is the 2,200-strong US Capitol Police.

The nation's capital continued to boost security by shutting down access to iconic landmarks and erecting vehicle checkpoints at a security perimetre surrounding central Washington.

The 32-year-old tradition of leaving a letter behind on the Resolute desk in the Oval office to presidential successors at first appeared to be at peril this year.

Trump has refused to accept the results of November’s election and vowed not to attend Joe Biden’s inauguration. That made it appear doubtful Trump will leave behind any handwritten, friendly advice for Biden.

However, a spokesperson has confirmed the existence of said letter. 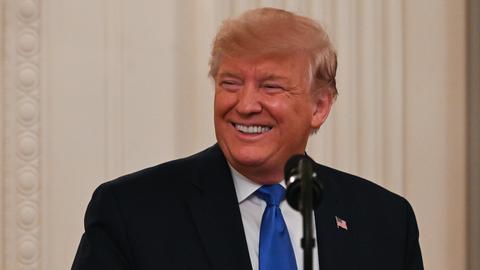