Heavy rains in Maharashtra state led to dozens of deaths since Monday night, from collapsed walls, drownings and other causes.

A dam breached and flooded half a dozen villages in western India after heavy monsoon rains, leaving at least eight people dead and 15 others missing, officials said on Wednesday.

Datta said a preliminary investigation suggested the heavy rainfall swelled the water level behind the small dam, causing the breach.

India's National Disaster Response Force (NDRF) said they were using drones over the area flooded by the breach of the dam, around 275 kilometres (170 miles) from Mumbai.

"We have located eight dead bodies and over 15 people are still missing," said spokesman Alok Awasthy.

Heavy monsoon rains in Maharashtra have led to dozens of deaths since Monday night, from collapsed walls, drownings and other causes.

Dozens of others have been injured.

The worst-hit city has been India’s financial and entertainment capital, Mumbai, where at least 24 people have died and over 60 others are injured.

Five days of rain in Mumbai disrupted flights, flooded roads and covered train tracks, though services were partially restored on Tuesday and resumed as the rain cleared on Wednesday.

Rescue teams with sniffer dogs were searching the area afterwards, and rescuers from the Indian navy also fanned out to help and rescue residents of the waterlogged city.

Six migrant construction workers were killed and five injured when a wall collapsed on their tin-roofed huts in Pune early on Tuesday, an officer in the city's Police Control Room said.

A 45-year-old watchman died when a wall collapsed on him late on Monday night, police said.

The Central Railway said in a tweet that "nature's fury" made operating trains a "safety hazard" in some areas.

Train services were running only partially on Tuesday after thousands of passengers were stranded overnight.

Millions of passengers commute daily on a network of famed railways in Mumbai.

As announced by CR, and looking at the forecast, suburban services now running as normal weekday schedule.
CR appreciate the support extended by commuters.

A public holiday was declared for Tuesday and the Maharashtra government said only emergency services would be functional.

Maharashtra chief minister Devendra Fadnavis tweeted: "People are advised to stay indoors unless there is any emergency."

A domestic flight skidded off the main runway at the Mumbai airport late Monday night, and flight operations were partially restored on Tuesday. At least 50 domestic and international flights were diverted and 50 other flights were cancelled. 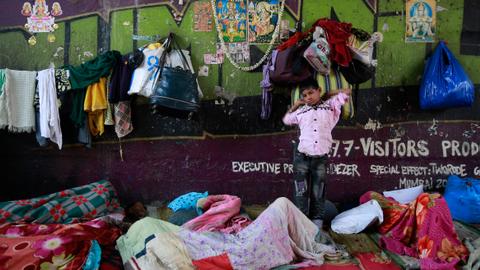