In June, Britain approved the extradition to the United States of the Wikileaks founder Julian Assange, who is an Australian citizen, to face criminal charges on the release of confidential US military records and diplomatic cables.

"I some time ago made my point that enough is enough. It is time for this matter to be brought to a conclusion," Albanese told parliament.

"I have raised this personally with representatives of the United States government. My position is clear."

The Australian leader said he did not have sympathy for many of the 51-year-old's actions.

But he asked: "What is the point of this continuing, this legal action, which could be caught up now for many years into the future?"

READ MORE: Julian Assange lodges appeal in UK court against extradition to US

Up to 175-year prison sentence

Assange, an Australian citizen, has been held in London's high-security Belmarsh prison since 2019, after serving time for skipping bail in a previous case and spending years holed up in Ecuador's embassy.

He is pending a US extradition request to face trial for divulging US military secrets in 2010 about the wars in Iraq and Afghanistan.

If extradited to the United States, he faces a sentence of up to 175 years in a maximum security prison.

Albanese compared Assange's treatment to that of Chelsea Manning, whose 35-year jail sentence for stealing secret documents was commuted by then-president Barack Obama in 2017.

Manning "is now able to able to participate freely in US society," Albanese said. 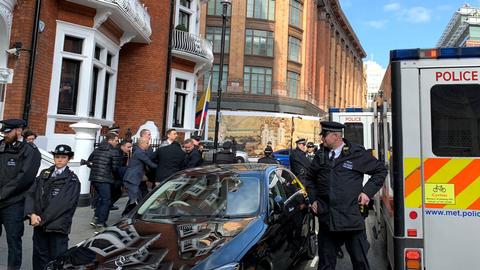