The increased indiscriminate attacks by Myanmar's military in the country's eastern region have killed and displaced tens of thousands with air attacks constituting "war crimes."

Myanmar's military has been targeting civilians in air and ground attacks on a scale unmatched in the country since World War II, according to a longtime relief worker.

Eubank described the fighting he had seen as probably the worst in Myanmar since World War II, when the country was a British colony still known as Burma and largely occupied by the Japanese.

There has been serious but sporadic fighting in Kachin State in northern Myanmar for a few years, he said, “but what I saw in Karenni I had not seen in this country before.”

He said that the military’s jets and helicopters stage frequent attacks in the areas of eastern Myanmar where he and his volunteers operate, bringing medical and food aid to civilians caught in conflict.

Half a century of fighting

Many are loosely allied with well-established ethnic minority armed groups - such as the Karenni, the Karen and the Kachin - that have been fighting the central government for more than half a century, seeking greater autonomy in the frontier regions.

Despite overwhelming superiority in numbers and weaponry, the military has failed to crush this grassroots resistance movement. The army has now stepped up attacks, taking advantage of the dry, summer conditions.

The United Nations refugee agency puts the total figure of internally displaced since the military takeover at just over half a million.

More than 1,670 civilians have been killed by the security forces since the army seized power in February last year, according to the Assistance Association for Political Prisoners. 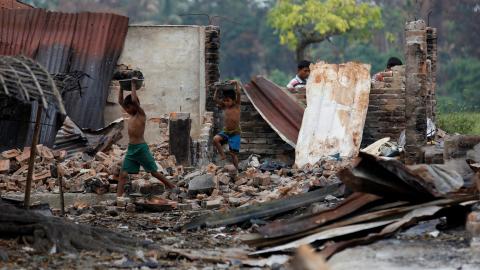