The murder of a young Japanese girl by ex-US marine has once again raised questions over the presence of American soldiers on Okinawa Island.

A wave of outrage has swept Japan after an ex-US marine was arrested for killing a Japanese woman on the island of Okinawa. The suspect is from the same military base where three American servicemen raped a 12-year-old girl in 1995. The latest incident has reignited a debate on whether the US military should continue its presence in Japan.

Kenneth Franklin Gadson, 32, was arrested on Thursday in connection with the murder of a 20-year-old woman who had gone missing while out on a walk on April 28. Police say Gadson, who also uses his Japanese wife's family name Shinzato, led them to the body of the woman which had been dumped in the woods.

He is also alleged to have raped the woman.

The news couldn't have come at a worse time for US President Barack Obama, who is traveling to Japan to attend the G7 meeting this week. But more importantly, he is about to become the first sitting US president to visit Hiroshima, a city destroyed by a US atomic bomb 71 years ago during World War Two.

Okinawa hosts more than half of the 50,000 American troops based in Japan. Locals have long been upset about Americans from the base committing crimes on the island.

Earlier this year, another US serviceman stationed in Okinawa was arrested on suspicion of raping a woman.

Protestors in Japan have already come out onto the streets in response to the incident and the US's policy concerning the base is facing intense criticism on social media, including from Americans.

America, please turn your eyes to Okinawa. Another woman has been murdered by one of us, this time a military contractor. ENOUGH IS ENOUGH!

"I have no words to express, considering how the family feels," Prime Minister Shinzo Abe said. "We urge the US side to take thorough measures to prevent the recurrence of such events."

Senior US officials have been trying to calm the situation. US Defense Secretary Ash Carter called his Japanese counterpart on Saturday to express regrets.

Carter "extended his sincere apologies to the victim's family and friends," Defense Department spokesman Peter Cook said in a statement. "He also expressed his sympathies to the people of Japan."

US Ambassador to Japan Caroline Kennedy has also expressed regret.

However, the White House has said the "terrible tragedy" is unlikely to change US policy. 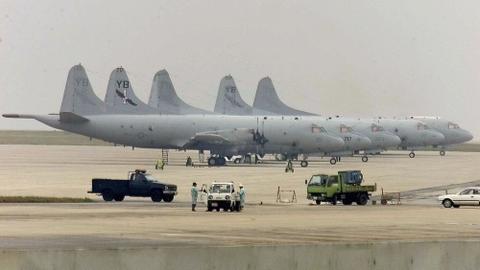 US serviceman kills woman and self in Okinawa, Japan says 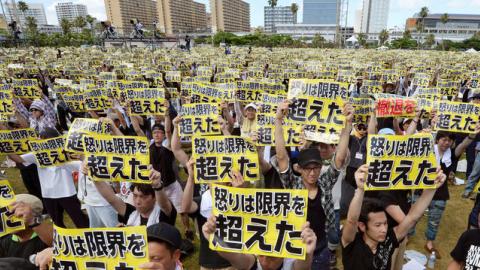 Thousands protest against US bases on Japan's Okinawa island