Imran Khan's call comes as Pakistan sees days of violent protests by the recently banned Tehreek-e-Labbaik group, which wants the French ambassador to the country ousted over President Macron's stance against Islam.

Khan in his televised speech pleaded with a hardline religious group to end its violent campaign to oust the French ambassador, saying the unrest was harming the nation.

Rioting has rocked the country for the past week since the leader of the Tehreek-e-Labbaik Pakistan was detained after calling for a march on the capital to evict France's top diplomat.

The group freed the 11 police officers who were seized by protesters on Sunday during clashes and held for hours at a TLP mosque, where hundreds of supporters are still gathered.

The group has waged an anti-France campaign for months since President Emmanuel Macron defended the right of a satirical magazine in Paris to republish caricatures depicting the Prophet Muhammed – an act deemed blasphemous by Muslims.

'Damaging our own country'

Khan said he also wants to stop "the insult of our prophet in the name of freedom of speech" by western nations, but said he could not expel ambassadors every time it occurred.

"If we keep protesting our whole lives we would only be damaging our own country and it will not impact (the West)," Khan said in a recorded address shown on TV.

"It doesn't make any difference to France," he added.

The TLP has called for a march on the capital Islamabad, where security has been boosted in recent days, at midnight on Tuesday if the ambassador has not been expelled.

France's embassy, which last week sent an urgent advisory recommending French nationals and companies leave the country, sent out a fresh alert on Monday telling its citizens to avoid gatherings.

The government is due to hold another round of negotiations with the party leaders on Monday evening, in a bid to quell the unrest.

Lahore police had earlier put the death toll at six.

TLP leaders say several of the party's supporters have also been killed and many wounded in clashes.

Calls for a nationwide strike in solidarity with the protesters was widely supported by mainstream religious groups and in Lahore and Karachi, many shops and markets were closed and some transport services halted.

Few issues are as galvanising in Pakistan as blasphemy, and even the slightest suggestion of an insult to Islam can supercharge protests, incite lynchings, and unite the country's warring political parties.

"The government has resorted to shedding blood of innocent people. The (protesters) are raising their voice rightfully and we support that," said Sharjeel Goplani, the head of a business association in Karachi, who supports the expulsion of the French ambassador.

Khan's government has struggled to bring the TLP to heel over the years, but this week announced an outright ban against the group.

In his address, he told Pakistanis that he was working with other Muslim nations to "jointly explain" to the West how "Muslims sentiments are being hurt."

The embassy is sending home non-essential French staff, a source at the Foreign Ministry in Paris told AFP.

A source at Punjab governor's office said the TLP in negotiations were demanding the release of their leader Saad Rizvi, whose detention last week sparked the protests, and a vote in parliament on the expulsion of the French ambassador, while the government wants an end to the repeated unrest.

Lahore police said on Monday that TLP supporters were refusing to bury the bodies of supporters being held at the mosque.

Also at the site was an oil tanker seized by crowds on Sunday. 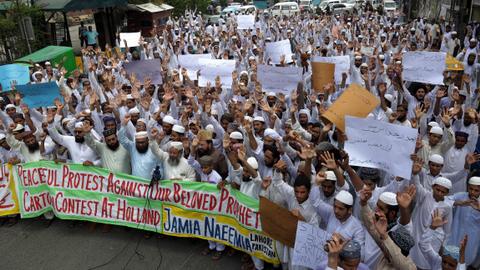