Pakistan's foreign office says the US State Department's designation of Syed Salahuddin, the head of the Hizbul Mujahideen rebel group based in Pakistan-administered Kashmir, as a "Specially Designated Global Terrorist" is "unjustified."

Pakistan came out in defence of rebels fighting Indian soldiers in the disputed region of Kashmir on Tuesday, saying it was a legitimate struggle for freedom, after the US put the head of one of the groups on its list of global terrorists.

The US State Department's designation of Syed Salahuddin, the head of the Hizbul Mujahideen rebel group based in Pakistan-administered Kashmir, as "Specially Designated Global Terrorist" was unjustified, Pakistan's foreign office said.

"The 70-year-old indigenous struggle of Kashmiris in the Indian-occupied Jammu and Kashmir remains legitimate. The designation of individuals supporting the Kashmiri right to self-determination as terrorists is completely unjustified," Pakistan's foreign ministry statement said.

The US decision came just days before Indian Prime Minister Narendra Modi visited the White House for his first talks with US President Donald Trump.

The sanctions mean that US individuals are banned from engaging in financial transactions with Salahuddin, and all his property in the US is blocked, the US State Department said on Monday.

Here is the US order designating Salahuddin a terrorist. Notice the mention of '#Kashmir'. It remains 'Indian administered' not 'Indian' pic.twitter.com/0Y6SYkAiUM

"India is crushing innocent Kashmiri youths, elders and women. It is carrying out atrocities on Kashmiris and the US president sits with the biggest terrorist Modi, declaring a freedom fighter a terrorist. This is very shameful," said Shamsher Khan, Deputy Supreme Commander of Hizbul Mujahideen.

The US move sparked demonstrations in Pakistan-administered Kashmir on Tuesday.

"We want to tell the whole world that the freedom of Kashmir is what we stand for, from the brutal and occupying country India, and no one has the power to blacklist anyone from our organisation or our leader," said Uzar Ahmed Ghzali, a protester.

Sardar Masood Khan, the prime minister of Pakistan-administered Kashmir, denied that Salahuddin had anything to do with terrorism, saying the group was engaged "in a struggle for the freedom of occupied Kashmir."

Political experts in India-administered Kashmir were surprised at the US decision.

"I don't think this is a principled position," and instead seems guided by US economic and political interests, said Noor Ahmad Baba, who teaches political science at the Central University of Kashmir.

"This man, per se, is not directed against America or its citizens. His activities have remained confined to Kashmir."

"What the US did is correct," Indian Home Secretary Rajiv Mehrishi said.

"This declaration by the US may probably help in impacting his movements and funding."

Good, Salahuddin named global terrorist. Not sure it'll bother him or his ISI/army hosts. Hafiz Saeed has done fine with that status for yrs

Salahuddin's Hizbul Mujahideen is the biggest rebel group fighting more than half a million Indian troops in Kashmir. Unlike the banned Lashkar-e-Taiba and other groups, the Hizb is a largely indigenous Kashmir group.

To his vast Kashmiri following, Salahuddin is seen as a hero and his cause of ousting India from the mostly Muslim region is considered just.

Kashmir remains disputed and divided between Pakistan and India since 1947, after the British vacated the subcontinent.

Hizbul Mujahideen, says the India-administered portion of Kashmir should be absorbed in Pakistan, reuniting the two sides as the single territory that existed before India and Pakistan gained independence.

India, which blames Pakistan for stoking the 28-year-old armed revolt in Muslim-majority Kashmir, has under Modi stepped up international efforts to put pressure on Pakistan to act against rebel groups operating from its soil.

Pakistan denies giving material help to the Kashmiri rebels but reiterated on Tuesday it would continue to provide political, diplomatic and moral support to the Kashmiri people in their struggle for self-determination. 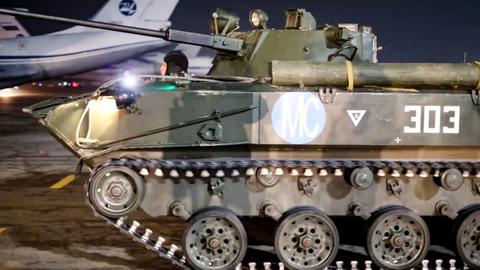