Indian police officers cleared protesters from the vicinity of the Sabarimala temple in Kerala state, hours before the temple's doors were to open to females ages 10 to 50.

A temple in southern India that is one of the world's largest Hindu pilgrimage centres opened its doors to females of menstruating age on Wednesday to comply with a Supreme Court ruling, but women weren't able to enter as hundreds of protesters fought street battles with police to keep them out.

As the gates of the Sabarimala temple were flung open, a crowd of male devotees surged towards the temple. About 1,000 police used batons to try to control the protesters, who attacked and damaged police and TV vehicles and bullied female devotees to turn back.

Police arrested 11 protesters when they tried to block the path of some females.

Pooja Prasaanna of Republic TV said the protesters hurled stones at a police van where she and her crew members had taken shelter after their car was targeted, and snatched away batons carried by police officers who tried to shield them.

The New Delhi Television channel reported that about 20 protesters surrounded a bus in which a reporter of the News minute channel was traveling and tried to pull her out. The reporter was kicked by angry protesters who hurled abuses at her, NDTV reported.

The entry of females between the ages of 10 and 50 to the centuries-old temple was banned informally for many years, and then by law in 1972.

In 1991, the Kerala High Court confirmed the ban. India's Supreme Court lifted the ban last month, holding that equality is supreme irrespective of age and gender.

Temple management and the protesters argue that the celibate nature of the temple's presiding deity, Lord Ayyappa, is protected by India's Constitution. Some religious figures consider menstruating women to be impure.

Meghna Pant, a female activist, said the celibacy of the deity was not more important than the equality of women.

"Who are men to decide where women can go or not?" she said.

Supporters of the ban have been angered by the state government's decision not to seek a review of the Supreme Court's ruling.

Rahul Easwar, an attorney for the temple, appealed to the female devotees not to enter the temple and give temple authorities until next week to file a petition for review with the Supreme Court.

Sabarimala is surrounded by mountains and dense forests in its location at the Periyar Tiger Reserve. Up to 50 million devotees visit the temple each year.

A number of temples in India have banned women, saying the policy is intended to preserve the purity of their shrines. The operators of a temple in the northwestern state of Rajasthan believe the Hindu god Kartikeya curses women who enter the temple, instead of blessing them.

India's secular courts have intervened recently in cases in which a religion's gender beliefs were seen as discriminatory. 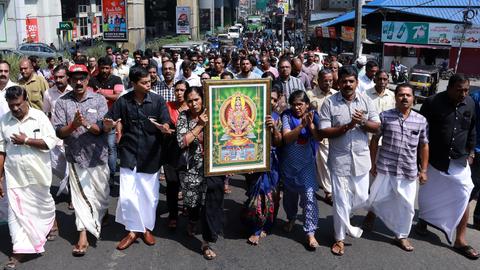