Britain on Friday hit back at French President Emmanuel Macron's uncompromising stance on Brexit, in a simmering row over new trading arrangements for Northern Ireland.

Macron on Thursday warned London that it was "not serious" to review agreements signed last December, just weeks before the UK left the European single market and customs union.

"Nothing is renegotiable," he said before heading to the G7 leaders summit in Cornwall, southwest England.

But Foreign Secretary Dominic Raab insisted that Brussels should be more flexible in its approach to Northern Ireland, which shares the UK's only land border with the EU.

Under the so-called Northern Ireland protocol, checks are required on some goods heading to the British province from mainland Britain – England, Scotland and Wales.

But that has angered unionist communities who say it has driven a wedge between them and the rest of the UK, and blamed it for a resurgence of violence.

Controls have been suspended, and London has extended a grace period for checks on deliveries of chilled meat products to the province.

"The change must come from the European Commission side," said Raab. "We are not negotiating or haggling the integrity of the United Kingdom," he told Sky News.

Talks to try to resolve the issue broke up in London without agreement on Wednesday, with Brussels threatening punitive action if London fails to implement the agreement.

The arrangement – to prevent unchecked goods heading into the EU through member state Ireland – effectively means Northern Ireland is still part of the European single market.

The row threatened to overshadow the G7 summit, with reports that US President Joe Biden was angered at the potential to harm the hard-won peace in Northern Ireland.

The president staunchly opposed the Brexit movement, the British exodus from the European Union that Prime Minister Boris Johnson championed, and has expressed great concern with the future of Northern Ireland. And Biden once called the British

Johnson played down reports of a rift on Thursday after the pair met for 90 minutes of talks.

But the issue is unlikely to go away, with Johnson due to meet European leaders keen to resolve the stand-off at the summit this weekend.

And in Northern Ireland itself, thousands of people gathered in west Belfast on Thursday night in defiance of coronavirus restrictions to protest against the protocol.

Police estimated that more than 3,000 people turned out unlawfully and marched on the Shankill Road. Social media footage showed the burning of a united Ireland banner.

Anger at the protocol has already led to the resignation of First Minister Arlene Foster and her replacement with a more hardline unionist who has promised a tougher line. 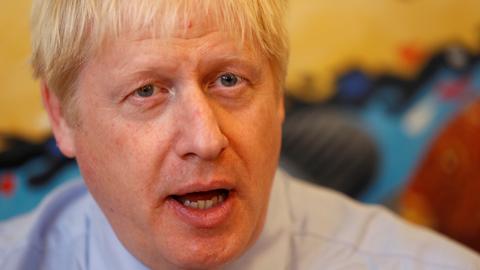