The annual World Economic Forum (WEF) Summit in the Swiss Mountains will be held from January 22 to 25. As some political leaders choose not to attend, many ask what the WEF has achieved so far and what purpose it serves.

More than 2,500 top business people, international political leaders, celebrities and journalists meet every year at the end of January for a four-day summit in Davos, a favourite Swiss winter holiday spot - to discuss ‘the most pressing’ issues of the world.

The summit is organised by the World Economic Forum (WEF), founded in 1971 as a non-profit organisation, and costs the Forum millions of dollars to organise, mainly funded by the high membership fees levied on the attendees.

Each person invited to attend the Forum needs to pay $71,000.

What is the World Economic Forum?

The WEF’s main self-described goal is ‘improving the state of the world by engaging business, political, academic, and other leaders’. This year’s agenda is named Globalisation 4.0 Shaping a New Architecture in the Age of the Fourth Industrial Revolution.

As per its title, the forum this year will aim to address problems around the ‘Fourth Industrial Revolution’ and what the WEF calls the ‘new economic global system’ with the aim‘to make everyone benefit from Globalisation 4.0’.

How this agenda shall be achieved will be discussed in more than 350 separate sessions.

Does the Summit serve its ‘purpose’

The Davos Summit is a highly criticised topic among economists, academics and NGO activists.

The Amsterdam-based Transnational Institute describes the Forum’s main role as a “socialising institution for the emerging global elite...promoting common ideas, and serving common interests: their own”.

In a broad study on the impact of the World Economic Forum on global issues, the US Journal of Consumer Research says that the Forum does not solve problems such as financial debt, poverty and global warming. Instead, it says:

“They shift the burden for the solutions from governments and business people to responsible consumer subjects.” These are namely the “green consumer, health-conscious consumer and financially literate consumer”.

However, Professor Steven Strauss, from Princeton University, points out:

“There is a tremendous advantage to people being able to meet privately, confidentially, to discuss matters. Despite all the media coverage, once you’re in the conference centre, Davos is one of the most private places on planet Earth.”

Why Macron, Trump and May won’t attend the Summit

Three political leaders will not attend the summit due to their own domestic issues.

Emmanuel Macron, Theresa May and Donald Trump announced their absence.

The French president been battling with Yellow Vest protests in his country, which still continue despite the political promises he made in a national television address on France 24 on December 11, aimed at quelling the protests.

Demonstrations are now in their tenth week, with around 30,000 set to march this weekend.
Emmanuel Macron is also wary of reinforcing his image as a ‘president of the rich’, an accusation that has been levelled at him by the protestors.

For her part, British Prime Minister Theresa May is in the midst of trying to find a new Brexit deal since her weeks-long negotiation draft was rejected by the UK parliament in what some have called a ‘historic defeat’.

The British government has to find a new deal by March 29 this year - the date set to be the official exit of the United Kingdom from the EU - and it needs to be ratified by both sides of parliament.

In the US, there is currently a government shutdown - the longest in US history. The shutdown came about due to President Trump’s demand to build a $5.7 billion wall at the US-Mexican border.
As a result, more than 800,000 federal workers have not been paid for almost a month.
Trump’s speech at the Davos Summit last year was criticised for not being ‘factually true’.
A couple of weeks after that speech, the US put into action what they call ‘global safeguard tariffs’, embarking on a trade war with China that threatens the global economy. 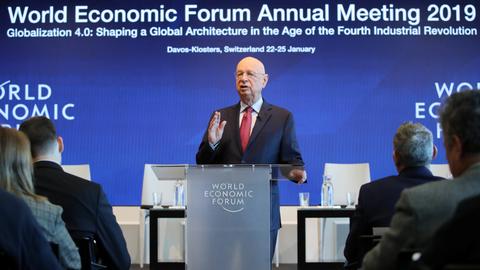