UN High Commissioner for Refugees, Filippo Grandi, urges EU states to stop sending asylum seekers back to Hungary for assessment until Hungary amends its new law on detaining migrants at the border.

The United Nations refugee agency called on European Union member states on Monday not to send Middle Eastern and African asylum seekers back to Hungary for assessment until Hungary amends its new law on detaining migrants or refugees at the border.

We're urging the temporary suspension of transfers of asylum-seekers to Hungary under Dublin: https://t.co/MYAXZkcG5v pic.twitter.com/orNhnUMIlP

Hungary's Prime Minister Viktor Orban, who has called mass migration a threat to Europe's socioeconomic make-up and a "Trojan horse for terrorism", has defended the policy that went into effect on March 28. Hungary has been a focal point for Europe's migration crisis since 2015.

The EU's so-called Dublin regime, based on the Dublin Convention signed in the Irish capital in 1990, allows EU states to return refugees to the first safe country they reached on their flight to the bloc.

The European Commission has said that Hungary must ensure that its new policy of detaining migrants does not break EU rules on protecting people in need of asylum.

"Since it came into force on 28 March, new asylum-seekers, including children, are detained in shipping containers surrounded by high razor fences at the border for the entire length of their asylum procedures," Grandi said.

As of last Friday, 110 people, including four unaccompanied children and children with their families, were held in Hungary, it said.

"While acknowledging the authorities' recent efforts to address police violence, we remain very concerned about highly disturbing reports of serious incidents of ill-treatment and violence against people crossing the border into Hungary, including by state agents," Grandi said.

According to the Hungarian government, 324 shipping container homes have been installed at two separate locations called "transit zones" built into a fence that Hungary erected along the 175 km-long border in 2015. 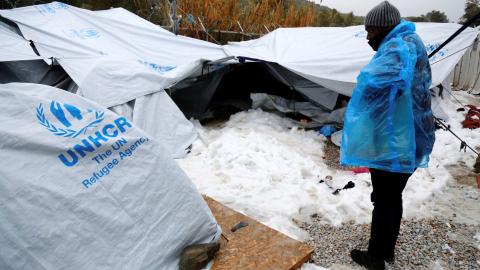