1
How social media is reacting to death of Tyre Nichols
2
How recycled computers offer Kenyan youth chance at a brighter future
3
Will tanks change the course of the Russia-Ukraine war?
4
What Islam says about responding to haters
5
Will Brazilian football fully open its doors to Middle Eastern investment?

European Union spokesperson tells TRT World that the bloc has identified a "slowdown" in Twitter's compliance with EU law, warning Musk must follow its new rules to continue services in Europe.

The European Union has warned Twitter owner Elon Musk of a possible ban in the 27-nation bloc if his platform did not comply with its digital regulations.

During a video call on Wednesday, Musk and the EU's commissioner for digital policy, Thierry Breton, discussed the Digital Services Act (DSA), which targets Big Tech over harmful content such as hate speech.

Their call comes after a meeting on May 9 in which Musk "committed to comply with (the) new EU online platform legislation," according to a readout of the video call. It said Twitter only has a few months left to comply with the new act, which entered into force in November 2022.

"Twitter will have to implement transparent user policies, significantly reinforce content moderation and protect freedom of speech, tackle disinformation with resolve, and limit targeted advertising," Breton said, according to the handout.

Coordinating Spokesperson for the European Union, Johannes Bahrke told TRT World that their latest assessment of platform actions under the EU Code of Conduct against illegal hate speech showed "a worrying trend."

The EU review found that the number of notifications reviewed by digital companies, including Twitter, within 24 hours dropped compared to the last two monitoring exercises. It went from 90.4 percent in 2020, to 81 percent in 2021 and 64.4 percent in 2022.

Meanwhile, the removal rate of content also declined for all companies. For Twitter specifically, the rate was 45.4 percent in 2022 compared to 49.8 percent in 2021.

The review "clearly points to a slowdown in progress for most of the participating companies, including Twitter," Barkle said.

"We have always been clear that we expect all online platforms to comply with their obligations and commitments under EU law and rules. All companies who offer their services in the Union will have to comply with the rules in the DSA."

In case of non-compliance with the DSA, companies face fines of up to six percent of global turnover and even a ban on operating in the EU single market.

If Twitter faces a ban in the EU zone, it will drain the platform of tens of millions of users and cause significant damage to its revenue stream.

While the US, India and Japan are the top three countries in Twitter use, European users make up a significant piece of the pie. A ban in the EU would drain tens of millions of users off the platform, as just France, Germany and Spain make up over 23 million users, according to statistics.

This cut in users would significantly reduce the revenue flow of Twitter which generated $5.08 billion in total revenues in 2021. So far, in the fourth quarter of 2022 alone, the platform has generated $1.57 billion.

Matt Navarra, an industry analyst with around 15 years of experience, told TRT World that he believes with this threat the EU wants to show that the DSA "has teeth".

"I think it sends a strong signal to Elon Musk that he is not going to be able to push forwards with his current plan and node of operation for Twitter in Europe that he is currently trialling or proposing in the US," Navarra said.

The threat of a ban sends "a strong message out that ‘it doesn’t matter what size company you are, the rules are now in place to manage these situations," Navarra adds.

Groups that monitor harmful content online, such as the Cyber Civil Rights Initiative, report an increase on Twitter since Musk, a self-described "free speech absolutist," bought the platform a month ago.

The Tesla CEO has vocalised an interest in rolling back Twitter’s previous content regulations, such as by discarding its Covid-19 misinformation policy and promising a "general amnesty" for suspended accounts that had violated content rules prior.

However, one of the most concerning changes has been in Twitter’s staffing after Musk laid off at least half the company’s 7,500-person workforce and caused the resignation of many others over an ultimatum to be "hardcore".

Barkle said that the bloc "expect platforms to ensure the appropriate resources to deliver on their commitments", including sufficient staff.

"We believe that ensuring sufficient staff is necessary for a platform to respond effectively to the challenges of content moderation, which are particularly complex in the field of hate speech," Bahrke said.

The drain in workforce is further concerning when you examine just how large Twitter’s reach is in Europe and globally. Twitter currently has 217 million active users with around 500 million tweets sent out every day globally, according to statistics.

"For those platforms that the Commission will designate as very large online platforms, the risk management obligations also include a strong component on the appropriateness of the resources allocated to managing societal risks in the Union," Barkle said.

"Among other matters, the Commission will scrutinise the appropriateness of the expertise and resources allocated, as well as the way they organise their compliance function," Barkle said.

Musk agreed to let the EU's executive Commission carry out a "stress test" at Twitter’s headquarters early in 2023 to help the platform comply with the new rules ahead of schedule, according to the EU readout.

Breton said he welcomed "Musk’s statements of intent to get Twitter 2.0 ready for the DSA" but warned that "there is still huge work ahead."

The EU will "be watching Twitter very closely", Navarra warns, adding that "Elon Musk is going to have to play by the rules and I think inevitably he will comply."

Navarra believes this provides "a good test case of a really large, popular social network to be used as an exemplar to the rest of big tech companies operating in Europe."

READ MORE: So it wasn’t the end of Twitter. But will the blue bird soar again? 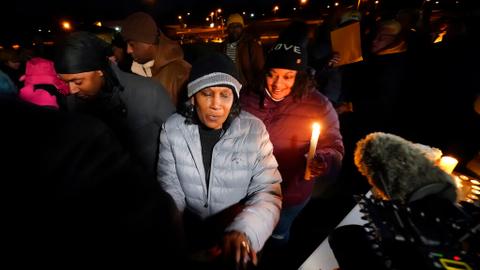 How social media is reacting to death of Tyre Nichols

1
How social media is reacting to death of Tyre Nichols
2
How recycled computers offer Kenyan youth chance at a brighter future
3
Will tanks change the course of the Russia-Ukraine war?
4
What Islam says about responding to haters
5
Will Brazilian football fully open its doors to Middle Eastern investment?