1
Vaccine nationalism to make Covid-19 worse
2
As the US deepens ties with Saudis, the EU urges an arms embargo on Riyadh
3
Greece tries to ‘soften’ anti-migrant policies by deploying female officers
4
Why fires in the US have become bigger and badder
5
UAE lobbying behind registering of AJ+ as foreign agent in the US

In an interview with TRT World, energy security analyst Omid Shokri Kalehsar touched upon several aspects of competing foreign policies in the Eastern Mediterranean, saying Moscow would like to play a dominant role in the overall energy equation.

The race for extracting energy resources in the Eastern Mediterranean presents various problems but also opportunities for cooperation among the countries involved.

TRT WORLD: Turkey's major energy policy goal is to become an energy hub between East and West. What has changed in Turkey in the last 10 to 15 years in this direction?

OMID SHOKRI KALEHSAR: Turkey’s energy market has expanded over the course of the past decade at a pace that only the People’s Republic of China (PRC) has approached. This shows that Turkey has serious potential. To achieve the energy targets for 2023, there is an expectation that the market must receive investments worth $130 billion.

One major potential opportunity for closer cooperation is Turkey’s ambition of becoming a regional energy hub, leveraging the country’s geography and pipeline network to serve as an energy corridor between the oil and gas-rich states of Central Asia and the Middle East and the major consumer countries in Europe. Turkey hosted some oil and gas pipelines and also made a huge investment in energy infrastructure. With liberalising the energy market and investing more in energy infrastructure, Turkey has a potential to be an energy hub in mid or long term.

At the end of 2019 Turkey signed two agreements with the internationally recognised government in Libya. What significance do these deals have in view of the Greek-Turkish Cyprus conflict over energy reserves in the Eastern Mediterranean?

OSK: Turkey needs to sign agreements with other East Med coastal countries too. If Turkey will be able to sign such agreements, Turkey has a chance to play active and vital energy policy in the region. Numerous meetings have been held with the leaders of the countries involved in order to discuss the future of Mediterranean resources. Due to tensions between Turkey and some of the countries in the region, Turkey has not attended some of these meetings– its absence has reduced its presence and impact on regional equations.

On January 2, Greek Cypriot Administration, Greece and Israel signed a basic agreement for the planned construction of the EastMed gas pipeline. How does this agreement affect Turkey's energy activities in the Mediterranean and what is the geopolitical agenda behind it?

OSK: Some analysts believed that in addition to the economic and technical challenges, the EastMed Pipeline also involved legal issues after the Turkey-Libya maritime agreement, Israel is aware of this entire situation. It should be noted that collaborating with Israel would be to collaborate with the US as well since the Israeli and US companies extracting Leviathan gas are partners. Thus, if there is a collaboration with Israel, all the balances in the East Mediterranean region will be in favour of Turkey and [Turkish Republic of] Northern Cyprus.

What would be the objective advantages of transporting gas from the Eastern Mediterranean via Turkey compared with the route of the EastMed pipeline, which has yet to be built?

OSK: To avoid entrance to Turkish territorial waters, this needs to be done in the depths of the high sea and this will substantially increase the cost. The longest and deepest open sea natural gas pipeline project in the world has from the very beginning been subject to technical and economic challenges. In addition, subsequent to the Turkey and Libya maritime agreement, legal issues will also emerge because the project involves a pipeline that extends along a marine area under Turkey’s scope of authority.

What do you think is the balance of power in the Eastern Mediterranean and what is the geopolitical dynamic from Turkey's perspective?

OSK: As a strategic ally of Israel, the United States has always supported its policies at the regional level, and given its good relations with Israel and Europe, it will obviously continue to support this project. Israeli gas exports to Europe would mean a decline in Russia's market share.

Energy diplomacy in the Mediterranean is ending. If Turkey's problems with the countries of the region are resolved within a certain framework, considering the interests of both parties, the Eastern Mediterranean pipeline project can be called the Peace Pipeline. If implemented, Israel would become a European energy security provider and a regional energy player. Israel can improve its relations with the Arab world by increasing energy production and exports, and it can also play a role in helping Palestinian economic growth.

On January 8, Russian President Vladimir Putin came to Turkey to open the TurkStream pipeline. How is Russia eyeing the developments in the Eastern Mediterranean?

OSK: Russia is by no means willing to reduce its share of the European gas market. If the conditions for exporting Mediterranean gas resources to the EU market are met, it would mean a decline in Russia's share of the EU gas market in the coming years. For this reason, Russia is carefully monitoring developments in the region. The presence of the Russian naval fleet in the region and numerous visits by Russian officials to those areas indicate Russia's plan to play an active role in the region's energy equations. Russia's support for the Assad regime in Syria could also be seen as part of Moscow's active diplomacy in the region.

Compared to Russia, how does the US assess the tension in the Mediterranean?

US support for its allies in the region is another factor for US military presence in those areas. In recent months, as the Turkish drilling activity on the Mediterranean coast has increased, the US has officially expressed concern about the operation. Last May, the US State Department issued a statement urging Turkey to reconsider its decision to drill offshore Cyprus. The US said in a statement that such actions exacerbated regional tensions and called on Turkey to halt drilling operations.

Ali Ozkok is an editor at TRT Deutsch. 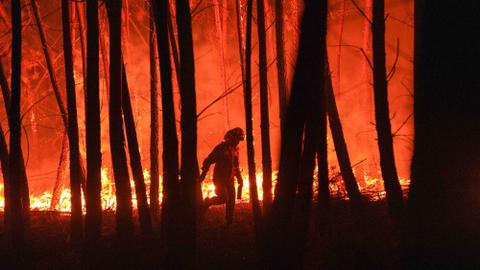 Why fires in the US have become bigger and badder

Myanmar blames the Rohingya for Covid-19, and that's a death sentence

1
Vaccine nationalism to make Covid-19 worse
2
As the US deepens ties with Saudis, the EU urges an arms embargo on Riyadh
3
Greece tries to ‘soften’ anti-migrant policies by deploying female officers
4
Why fires in the US have become bigger and badder
5
UAE lobbying behind registering of AJ+ as foreign agent in the US